Call for review of law to establish Minerals Rights Authority

Kenya Minerals Rights Board chairman says the authority, if put in place, would bring sanity to the industry

• In the recent past, small-scale miners have suffered tragedies, with deaths reported in Bondo (Siaya) and Migori.

• Kuria said the industry has been faced with a myriad of challenges, ranging from environmental and safety issues. 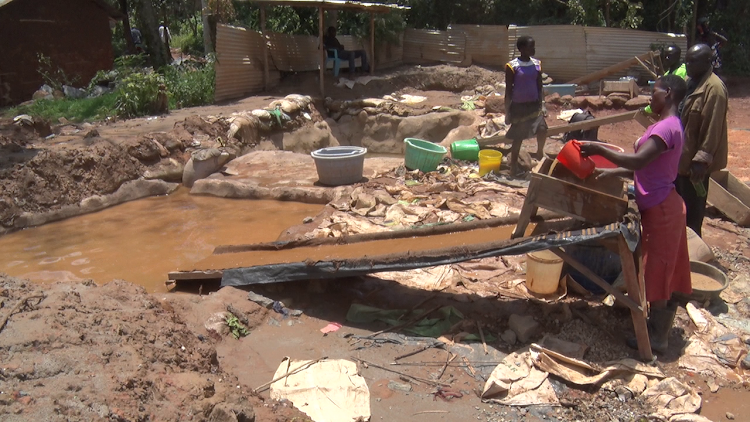 A woman extracts deposits of gold using mercury. The government, environmentalists and the United Nations Development Programme have partnered to reduce and later completely eradicate the use of mercury that is toxic to both humans and the environment.
Image: KNA

Board chairman Stephen Kuria said on Tuesday the authority, if put in place, would bring sanity to the mineral industry.

He said the industry has been facing a myriad of challenges, ranging from environmental to safety issues.

“The authority will be equivalent to the National Environmental Management Authority to ensure that it drives compliance and safety to the site,” he said.

In the recent past, small-scale miners have suffered tragedies, with deaths reported in Bondo (Siaya) and Migori.

Kuria said the authority will help address such calamities by putting in place stringent measures to be met in minefields.

He said the board has been striving to reform the mining industry, which is contributing heavily to the country's GDP.

Kuria spoke in Kisumu during an induction workshop for artisanal mining committees from Vihiga, Kakamega, Narok and Migori counties.

He said the board is committed to bringing order to the industry for the benefit of stakeholders.

“These artisanal committees have been gazetted, except for Narok. They will facilitate artisanal mining permits,” he said.

The United Nations Development Programme (UNDP) is offering support to build the capacity of players in the mining industry at the grassroots level.

Kuria said the country has 800,000 artisanal miners who need to be organised for their trade to thrive.

“We have very fragmented artisanal miners and they are important to the growth of the economy of the nation,” he said.

In Kakamega, Kuria said there are 8,000 artisanal miners who contribute Sh2 billion annually to the county government.

“This is an indication that we must put proper policies and laws to guide and regulate the sector,” he said.

Kenya Chamber of Mines chief executive director Moses Njeru welcomed the support from the UNDP, saying it would help weed out bad practices.

“The project is coming with better technologies that are not using mercury that has put the lives of our members at risk,” Njeru said.

He announced that the support will link them to better financial services nationally and globally.

Njeru said they are working with all stakeholders to ensure the industry thrives in a clean environment as it looks ahead to avert tragedies in the minefields.