Through their secretary general Ezra Okoth, the Kenya Federation of Sugarcane farmers said the arrears owed to them has accumulated since 2011.

Okoth asked legislators to expedite the enactment of the Sugar Bill 2019 which is still laying in parliament. 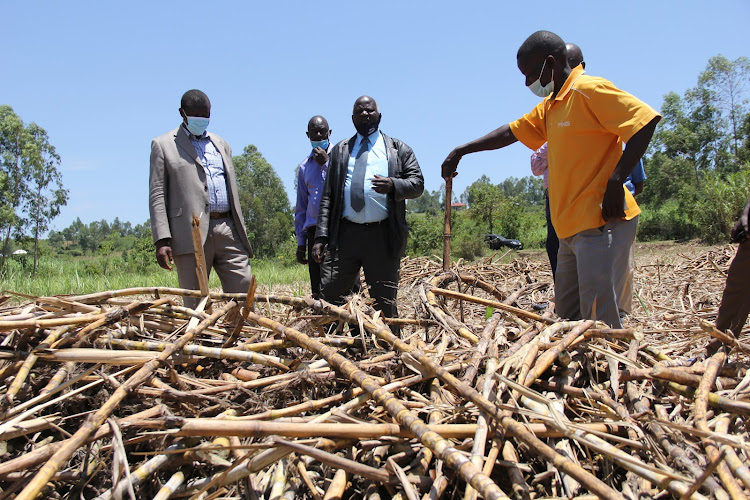 Cane farmers from Nyanza and Western regions want clearance of their arrears prioritised in the use of the Sh1.5 billion stimulus package announced by President Uhuru Kenyatta for the sector.

In his speech on Mashujaa Day celebrations, President Kenyatta said his government had released Sh1.5 billion to aid the ailing sugar sector.

He said the money is to be used by factories for maintenance and payment of farmer’s arrears.

Farmers, however, want the payment of their arrears to come first.

Through their secretary general Ezra Okoth, the Kenya Federation of Sugarcane farmers said the arrears owed to them had accumulated since 2011.

He said all the arrears should be cleared as quickly as possible before millers engage in other activities.

“Millers owe farmers up to Sh600 million and it would be prudent if the debts are cleared first. Let farmers get favoured this time around,” Okoth said.

The funds from the government are part of a new stimulus programme targeting key sectors of the economy.

Other sub-sectors include tea which got Sh1 billion to safeguard the gains made by farmers by supporting fertiliser subsidies.

“To safeguard the livelihoods of farmers within our nation’s sugar belt, I direct the National Treasury to allocate an additional Sh1.5 billion in aid of the sugar sector, that will be appropriated towards factory maintenance and payment of farmers arrears,” Uhuru said.

The news gave hope to many farmers, some of whom were contemplating ditching cane growing for other crops.

Okoth said the sugar sub-sector needs a lot of support. He asked the millers to ensure farmers’ welfare is taken care of as a matter of priority.

“The other funds can be used to maintain the machines. We need to start a new system of operation with clean records,” he said.

He said officials should also prioritise the purchase of inputs like fertiliser.

Some of the ailing sugar millers in region include Sony, Muhoroni, Chemelil and Mumias.

Cane growers are also calling for more interventions to help them recover from economic misfortunes occasioned by the collapse of the factories.

Okoth asked lawmakers to expedite the enactment of the Sugar Bill 2019 which is still in Parliament.

The bill wants to reintroduce Kenya Sugar Board which will be responsible for controlling duties, taxes and other tariffs applicable to sugar being imported into the country.

The bill also seeks to give farmers more say in the management of sugar factories by apportioning them a 51 per cent shareholding in privatised sugar firms.

The farmers, to be referred to as growers, will also have more than half of the representation at the board of directors.

“The proposed law will address issues like non-payment of farmers by public sugar companies which is the main factor ailing the sugar industry,” Okoth said.