Western leaders make demands to Raila in exchange for support 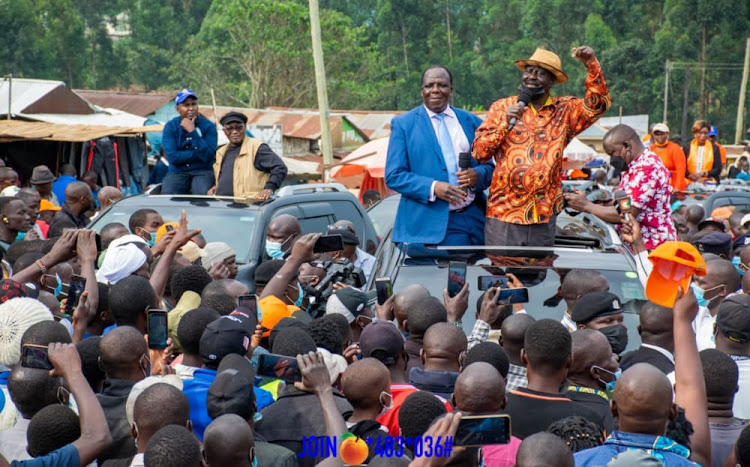 Leaders from the Luhya community on Friday made their demands to ODM leader Raila Odinga as a condition to support his presidential bid in 2022.

MPs Emmanuel Wangwe (Navakholo) and Bernard Shinali (Ikolomani) urged Raila to use the handshake with President Uhuru Kenyatta to push for development in the region.

“When you sit with the President, remind him that construction of the Lurambi-Nambacha-Musikoma road that was to be completed in two years is still at 35 per cent four years later,” Wangwe said.

Shinali said Luhyas will support Raila if he pushes for development in the region. He said Western residents want a gold refinery built in Kakamega.

“We have issues that we know you have the ability to address. Our interests are the same. If you can address them, we’ll walk with you,” he said.

Raila met a section of leaders from Western at Golf Hotel on Friday.

Osotsi said the Luhya community should be careful not to falter again as the country picks its fifth president. “Raila is the face of democracy in Kenya,” he said.

“The bottom-up economic approach is simply devolution, which advocates for resources to trickle down to the grassroots,” he said.

Eseli said Raila is the only reformist among those seeking the presidency, having fought for reforms throughout his political career.

“If we want a better country for future generations, we should make Raila the head of state. Some of those seeking the presidency only want to loot public coffers. I will support a progressive leader, not just anybody,” he said.

Ongwae, the vice chairman of the Lake Basin Economic Bloc, said the presidency must rotate.

He said Luos, Kisiis and Kurias met in Nyanza and made a secret declaration that they must engage Luhyas to ensure the presidency goes to the lake region.

“We have been here since Independence, but have never produced a president. Make sure your vote counts in 2022. We have an opportunity to have a president from this side so that the seat can rotate,” Ongwae said.

Junet said the journey started by Raila in Nakuru is aimed at ensuring all Kenyans were united.

“We’re making a big ship to accommodate all Kenyans,” he said.

Raila said together with the President, they have envisaged a Kenya that is a sum total of the aspirations of its regions, tribes, ethnic groups, faiths, social class and demographic composition that no one feels left out.

He said the shared prosperity that the Building Bridges Initiative sought to achieve begins with planting the spirit of unity, reconciliation, tolerance and hope.

“It begins with us seeing each other not as enemies to be subdued but as partners to be embraced in search of the well-being of our people,” Raila said.

“We are not looking for followers or bystanders. We are looking for partners and active players; men, women and youth on the same journey, same mission, with one agenda. With that partnership, we can all come to the table and begin a candid discussion on what is holding back our people here,” the ODM leader said.

Raila said the quest for a third liberation is to seek lasting unity and stability of the nation, the creation of viable and credible opportunities for our youth and prosperity for all.