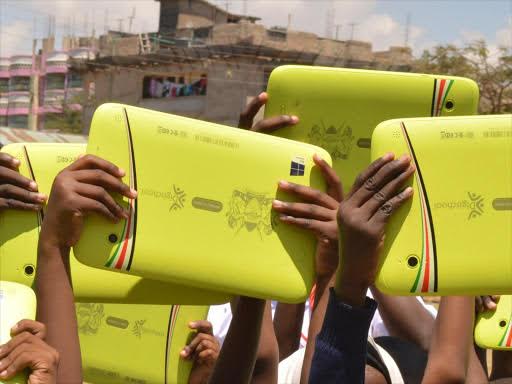 TABLETS: Computer tablets, like the 71 stolen from a Bursia primary school.
Image: FILE

Seventy-one computer tablets stolen from a Busia primary school in Teso have been recovered in Uganda.

A Ugandan suspect carrying them on a motorbike was arrested on Thursday at an unofficial border crossing, police said.

The tablets are intended for Kenya's Digital Literacy Programme.

The suspect was identified as Evans Wanda, 24, police said.

The devices were returned to Kenya on Saturday.

Police said they expect to arrest more suspects to be arraigned on Tuesday.

Upon recovery, Ugandan police alerted their Kenyan counterparts in Bungoma who visited the Lwakhakha police station in Uganda and identified the branded laptops.

They were stolen from Moding Primary School in Teso, Busia county.

A guard at the school had reported to Moding police the tablets were stolen at unknown time on March 31.

Police said the suspect told them he had bought the tablets from a contact in Bungoma town.

Bungoma head of DCI Joseph Ondoro said suspect was attempting to cross  to Uganda through an ungazzetted route when he was arrested by Uganda police.

The case was handed over to Teso police.

Detectives are investigating how the tablets were stolen from the school and are seeking more suspects.

The Jubilee government had promised to give every Class 1 pupil free laptops. There were cost and delivery problems, they changed to tablets. Now Kenya is focussing on computer labs.

Many schools lack secure clean facilities for storage; some had no electricity. Many teachers were uncomfortable with computers and the programme, so it got off to a sputtering start.

Then schools closed because of Coid-19.