• Alex Lanya of UDA was third with 5, 513 votes with independent Bernard Wakoli coming in fourth with 1, 536 votes.

• Mudavadi declared that a victory for ANC in Matungu and Ford Kenya in Kabuchai will be the key to the much-needed change in the leadership of the Luhya community. 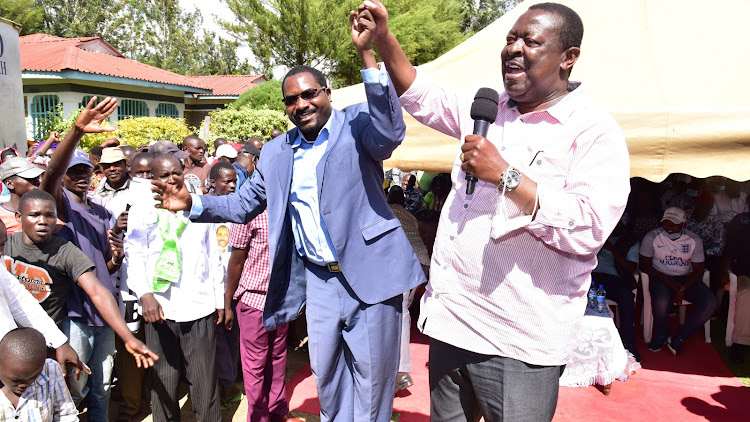 ANC's Peter Nabulindo was declared the winner of the hotly contested by-election after garnering 14, 257 votes against ODM's David Were who received 10, 565 votes.

Alex Lanya of UDA was third with 5, 513 votes with independent Bernard Wakoli coming in fourth with 1, 536 votes.

The results were declared on Friday morning by the Matungu Returning Officer John Kirui.

The seat fell vacant following the death of Justus Murunga on November 14.

All other candidates except the late Murunga's widow Christabel Amunga were present. She wished Nabulindo well.

The vacancy in the constituency occasioned high octane campaigns in what degenerated into a contest between key politicians angling to succeed President Uhuru Kenyatta and the supremacy battle for the control of the Luhya bloc ahead of the 2022 race.

Mudavadi, Raila and Deputy President William Ruto used the mini poll to size themselves ahead of 2022.

While Mudavadi and his Ford Kenya counterpart Moses Wetang'ula used the polls to confirm they were in control of the region, Raila on the other hand used it to test his influence in the region that has supported him for close to two decades after he fell out with his fellow Nasa co-principals.

Ruto on the other side was using the outcome of the poll to probably gain a foothold and build on the Msambweni victory where he upset ODM by supporting an independent candidate.

Oparanya who hoped to use the poll to assert himself as a force to reckon with in Luhya leadership by upsetting Mudavadi could be the biggest loser from the Matungu poll.

Oparanya has declared that he will give for the presidency in 2022 on an ODM ticket.

A win by ODM would have signalled an emergence of Oparanya as an alternative force to counter Mudavadi and Wetang'ula.

"There is no way he will ask Raila to give him the ODM ticket when he cannot win a parliamentary seat in his own backyard," he said.

Andwati said that the results also indicate that DP Ruto has not made meaningful inroads in the region and he will have to go back on the drawing board.

He said that the outcome solidifies western and now gives the pair of Mudavadi and Wetang'ula time to seek support outside the region.

"If you look at what happened in Matungu, we are going back to the 2002 scenario. You saw youth coming out strongly to protect their votes and declaring they will not allow leaders being imposed on them," he said.

Mudavadi was on Friday set to, jointly with Wetang'ula address supporters in Bungoma and Kakamega over the outcome of the mini polls.

During campaigns, Mudavadi declared that a victory for ANC in Matungu and Ford Kenya in Kabuchai will be the key to the much-needed change in the leadership of the Luhya community.