Raila to tour Busia on Sunday to sell BBI

In the agenda, the ODM leader will conduct a meet-the-people tour in Busia town among other engagements 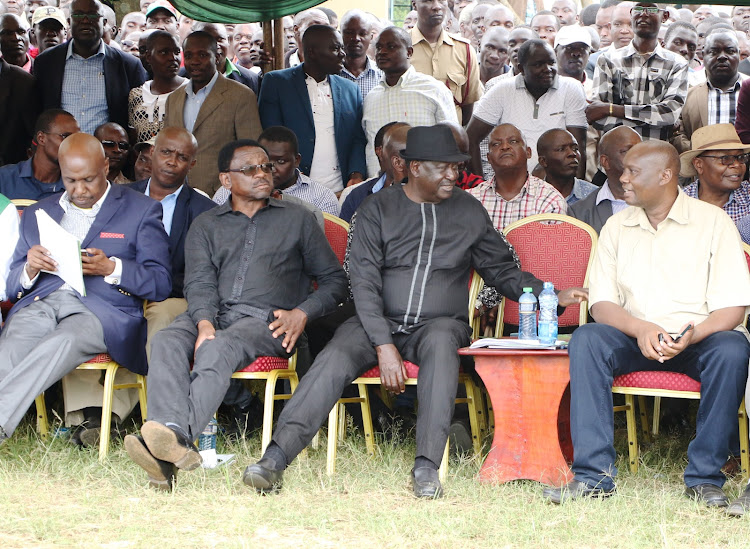 ODM leader Raila Odinga will be in Busia on Sunday as he seeks to solidify his political base after County Assemblies passed the Constitution (Amendment) Bill 2020.

He visits the county 10 days after the County Assembly passed the BBI Bill which he has been pushing for.

According to Governor Sospeter Ojaamong the former Prime Minister is expected to start the tour of the border county by attending a mass at Lwanya Catholic Church at 10am.

He will then hold a brief meeting with leaders from the county at Bukalama Resort before embarking on a meet-the-people tour of Busia town at 1.30pm.

Among issues the governor said local leaders will demand during the tour is the push for the creation of at least one constituency in the county.

The BBI Bill seeks to create 70 constituencies spread across the country but Busia is among counties expected not to benefit from the redrawing of constituency boundaries, a development that will send 70 more MP to Parliament after the 2022 polls – that is if the BBI push sails through the referendum.

Busia has long been one of the ODM leader’s strong political bases.

The former opposition stalwart has been pushing for the passage of the BBI Bill and local leaders have been burning the midnight oil to ensure residents in the county back the initiative.

The County Assembly of Busia passed the BBI Bill on February 16.

The Governor said he will join county residents in demanding for an additional constituency in the county.

“The Building Bridges Initiative Constitutional (Amendment) Bill 2020 has created 70 new constituencies, but Busia is not among the beneficiaries of the initiative,” Ojaamong said.

“If our party leader will give a nod to our proposal we shall say thank you to God. I urge county residents to accord the former premier a befitting welcome.”

Ojaamong who will be hosting President Uhuru Kenyatta’s handshake ally has been a longtime close political associate of Raila.

He said his government and Members of the Country Assembly have joined forces to back Uhuru and Raila in supporting the BBI initiative which will transform lives of county residents.

“The BBI Bill will ensure 35 percent of the equitable share trickle to counties. This will offer relief to county residents,” he said.

Busia presently has seven constituencies of which five are represented in Parliament by MPs elected on ODM party tickets.