Focus on your work, I’ll visit Bungoma whenever I want, Lusaka tells Wangamati 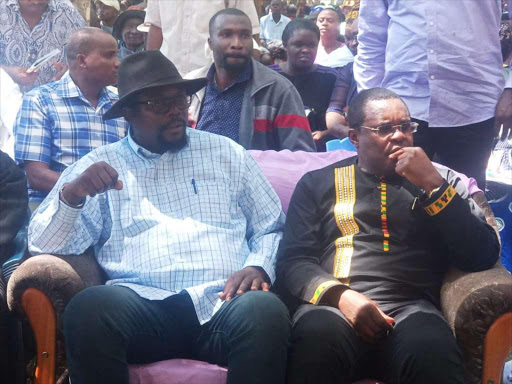 Senate speaker Kenneth Lusaka has told Bungoma governor Wycliffe Wangamati to stop blame games and instead deliver to the electorate.

He said residents need quality services and improved living standards. Wangamati faces more than five county assembly petitions filed by members of the public opposed to his recent appointments of chief officers and advisers. He is also under probe by the Directorate of Criminal Investigations and the Ethics and Anti-Corruption Commission over allegations of abuse of office and financial irregularities.

He has blamed external forces for his problems. Wangamati and Deputy Governor Ngome Kibanani had accused the speaker of sabotaging their administration. They criticised his frequent weekend visits and warned him to focus on his Senate work.

But on Saturday, Lusaka dismissed the accusations. He said he won’t stop visiting his home county.

“Where do they want me to go? I must come home and meet my people. I must share with local leaders to see how we can improve our county,” Lusaka said at a burial in Buema, Bungoma.

The former governor accused Wangamati of failing residents. Not even a single flagship project has been implemented, he said.

“When I lost the election, I took all my belongings and out of good faith handed over power to them. I’m surprised that day in and out they blame me for sabotaging their leadership. One year down the line, they ought to have moved forward,” Lusaka said.

He said there is nothing wrong in what he has been doing and said he will continue meeting MCAs and other grassroots leaders ’for the good of the county’. Lusaka told Wanagamati to do the right thing and comply with the law to avoid problems with residents and national authorities.

“I was governor for five years. I can assure you that petitions and a strong oversight by the assembly is very normal and makes you keener.”

“You’ve seen how agencies fight graft. The safest way is to do things right.”