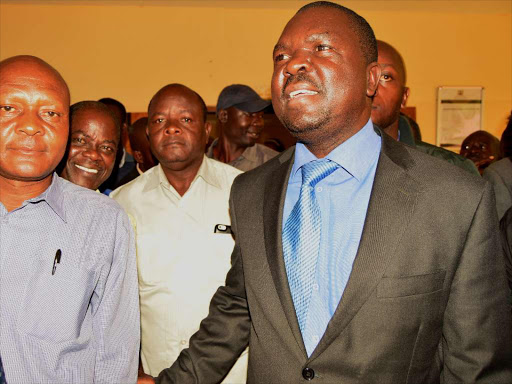 Navakholo MP Hon. Emmanuel Wangwe at the Kakamega High Court on 4th October 2017 after a pre-trial conference concerning an election petition against him by Amisi Mukanda

Through lawyer Simoni Namada, he said records at the registry indicate a Sh500,000 cheque deposited in court for cost by petitioner Amisi Omukanda of MDP bounced.

Wangwe says Omukanda failed to correct the anomaly within 10 days as required by law. He said on Wednesday the cheque was drawn by a company, where another Navakholo MP race loser, Simbauni Ndombi, is a director.

Wangwe said failure to pay the Sh500,000 security for cost violates Section 78 of the Elections Act.

“The Act is clear and states that the petitioner shall deposit security for cost within 10 days. The petitioner didn’t comply. On that ground, this case should be dismissed in its entirety,” he said.

But Omukanda, through lawyer June Ashioya, said the money was paid within the required time.

“Failure to pay security cost does not render the petition incompetent to warrant striking it off. After realising the cheque bounced, my client paid the money and, in fact, incurred a Sh650 penalty,” Ashioya said during a preliminary hearing of the petition to agree on issues to be covered in the main petition.

Justice Jesse Njagi will rule on the matter on November 9.

Through lawyer Wilfred Nyamu, he said David Wamatsi filed a petition that lacked competent affidavits, as a commissioner for oaths did not stamp them as required by law.

Wamatsi, through his lawyer Moses Munoko, acknowledged the affidavits were defective, but requested the court to allow him amend or re-swear the affidavits to conform to the legal requirements.

IEBC’s Alex Masike said the petition failed to meet the basic requirements of the Parliamentary and County Election Petitions Rules 2017. He said the petition did not state the results declared at the constituency to comply with the law.

A ruling on the matter will be made on November 2.