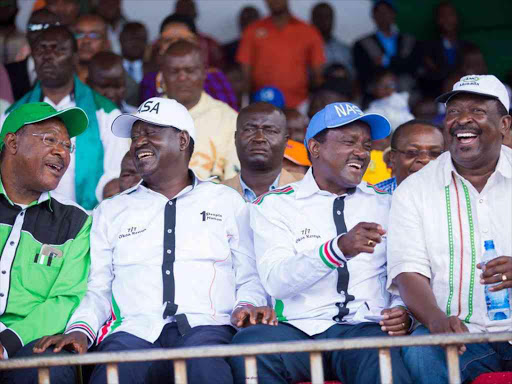 His problems include his inability to attract countrywide support, lack of experience in senior government and the added presence of Amani National Congress leader Musalia Mudavadi.

His career hangs in the balance.

The National Super Alliance was officially launched yesterday as a united opposition front against the Jubilee Party.

“In case he is left out of the two top positions, he’ll have to wait until after the August 8 election to be appointed in case of a NASA victory,” political scientist Frank Matanga told the Star yesterday. He lectures at the Masinde Muliro University of Science and Technology.

He said Wetang’ula is viewed as junior among his co-principals Raila Odinga (ODM), Mudavadi and Kalonzo Musyoka (Wiper).

“Mudavadi overshadows Wetang’ula in NASA because he brings numbers on the table as Luhya spokesman. Kalonzo brings Kambas and Raila Luos for negotiations for the ticket,” Matanga said.

He said a NASA candidate must have the ability to attract support from outside his home turf. This is something Mudavadi has but Wetang’ula lacks, he said.

In July last year, political scientist and former minister Amukowa Anangwe said, “The goose is already cooked for Wetang’ula as he has no option but to play second fiddle to Raila, Mudavadi and Kalonzo in the opposition.:

Wetang’ula and Kakamega Senator Boni Khalwale opposed creation of NASA, insisting Mudavadi should have instead joined Cord. They backed off when Raila and Kalonzo backed the idea.

Matanga says the Bungoma senator is better off climbing down to run for governor or defend his seat.

There have been calls for Wetang’ula to run for Bungoma governor, but he has insisted he is in the presidential race to the end.

Commentator Martin Andati yesterday said Wetang’ula is between a rock and a hard place.

He said that the fact that the Bungoma county leadership has pitched camp in Jubilee complicates his chances of clinching the NASA ticket.

“If he returns to run for governor, he will create a lot of confusion in Bungoma because he will increase the number of opposition candidates who could split votes.

“This would work to the advantage of incumbent Ken Lusaka, who could end up winning by a minority,” Andati said.

He said Wetang’ula failed to use his position as Cord co-principal to establish himself by strengthening his party in readiness for the August poll.

Andati said Jubilee, through the National Intelligence Service, is behind the opinion polls suggesting Raila as the most suitable to fly the NASA flag.

That’s because they think they would easily defeat him if he heads the NASA ticket.