• NTSA director says the economic impact caused by road carnage is heavy and has been on the increase every year.

• She said as the country heads to the Christmas and New Year festivities, matatu and bus saccos must sensitise their drivers to be more careful so Kenyans travel safely. 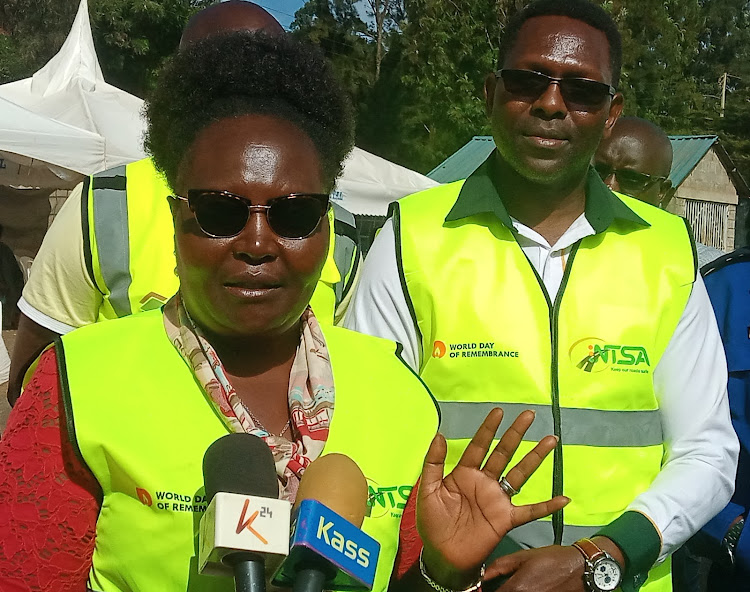 Road accidents cause losses of more than Sh310 billion annually in the country, NTSA director Alice Chesire has said.

Chesire said the economic impact caused by road carnage is heavy and has been on the increase every year.

She said Kenyans, especially drivers, must exercise responsibility and be part of efforts to reduce accidents which rob many families of their breadwinners.

“The losses as a result of accidents are huge, especially to affected families. We must all team up to ensure our roads are safe for all users,” Chesire said.

She spoke in Eldoret on Sunday during an event to remember victims of accidents in the country.

NTSA partnered with hospitals in the region, traffic police and the Uasin Gishu government during an event marked at the law courts in the town.

Chesire said all road users must be careful and exercise responsibility so as to reduce the road carnage which claims more than 3,000 lives annually and leaves thousands of others maimed.

She said as the country heads to the Christmas and New Year festivities, matatu and bus saccos must sensitise their drivers to be more careful so Kenyans will travel safely.

“We usually experience a high number of accidents, especially during the month of December, but as NTSA and other stakeholders, we have teamed up to carry out early sensitisation exercises for all stakeholders to help us save lives,” she said.

Mikoyan said the small claims court in Eldoret has registered more than 800 cases since it was launched by Chief Justice Martha Koome in March this year.

He said it has successfully completed 668 cases, with only one taken for appeal.

Mikoyan said the court has been able to quickly dispense justice, especially for victims of accidents and other Kenyans with claims of Sh1 million and below.

“Some of the cases for accident victims have been taking too long in our courts, but through the small claims court, we have been able to speed up such matters so that victims get compensated at the time they need the money,” he said.

Mikoyan said Kenyans should also get used to alternative justice systems instead of clogging courts with cases that end up taking too long to resolve.

“As the Judiciary, we are open to working with all other stakeholders to ensure issues including accident cases are resolved very fast,” he said.

Chesire said NTSA is in the process of enforcing instant fines on the roads as another way of handling traffic cases in a quick manner.

Post a comment
WATCH: The latest videos from the Star
by BY MATHEWS NDANYI
Rift Valley
21 November 2022 - 22:00
Read The E-Paper