The party is carrying out negotiations with aspirants to drop out in favour of one of them. 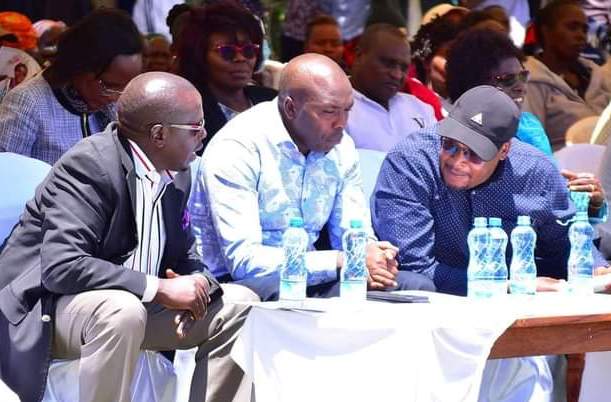 Campaigns for the Elgeyo Marakwet Senate seat have intensified following the resignation of Kipchumba Murkomen to become Transport Cabinet Secretary.

More than 30 aspirants have shown interest in the seat, with most of them pitching tent in the region to lobby for support as the United Democratic Alliance primary looms.

Three leading aspirants, including former Keiyo South MP Jackson Kiptanui, have, however, withdrawn from the  race amid reports that UDA  was planning to directly nominate its candidate.

The Independent Electoral and Boundaries Commission has set January 5 as the date for the by-election.

It will be held alongside by-elections in Kandara and Garrisa Township, where CSs Alice Wahome (Water) and Aden Duale (Defence) also resigned.

UDA has been carrying out intense negotiations with the aspirants to drop out in favour of one of them and Kiptanui, along with former speaker of county assembly Albert Kochei and Lawrence Mutwol, confirmed that they had pulled out of the race.

“After serious consultations with my family, friends and my supporters across the county, I have shelved my political ambition to vie for senator Elgeyo Marakwet county in the upcoming by-election,” Kiptanui said in a statement.

He did not explain reasons for his exit but sources in UDA said he was among those listed to be appointed in other positions in Ruto’s administration.

“I wish all the aspirants the best and may the best candidate win to continue the excellent work started by CS Murkomen and thrust our county higher,” Kiptanui said.

He had already started campaigns for the seat in the last three weeks.

“To my supporters our dream is deferred. To all Elgeyo Marakwet residents we will still engage as we serve our county and country in other capacities,” the former legislator said.

Sources within UDA said the party was considering to directly nominate either Soy MCA North Jonah Tanui or politician Jerotich Seii to be the party’s candidate.  Tanui has indicated he may resign to vie for the senate seat.

Other candidates still in the race include former Marakwet West MP William Kisang. There are several other political newcomers who are however under pressure to quit.

The President William Ruto-led party is considering avoiding gruelling campaigns and associated costs of the by-election if only its candidate will be cleared by the IEBC unopposed.

So far, other parties have not fielded candidates for the seat.

Former Elgeyo Marakwet governor Alex Tolgos declined to vie for the position a month ago.

Tolgos vied for the same seat in the August 9 general election through Jubilee but lost to Murkomen. The county chief now says even though he is young, he has decided to take a break from politics and move on with his private business.

“I will not be in the race this time but wish everyone well,” he said.

Murkomen has said he "will work with anyone who will be elected  by the people of Elgeyo Marakwet to take over the Senate seat.”

"We thank the President for appointing Murkomen to the Cabinet because of his hard work and, as people of Elgeyo Marakwet, we support the decision," Kisang said.

He said he had worked well as MP for two terms, but lost out in the last election and that he would now vie to serve the county.

"Having been MP for two terms, I am well placed to be senator for Elgeyo Marakwet to take over from Murkomen," the former lawmaker said.

The county is mainly inhabited by the Keiyo and Marakwet sub-tribes of the Kalenjin communities, and are likely to compete on who would produce the next senator for the region.

Primaries will also be held in Elgeyo Marakwet county.
News
3 weeks ago

The resignation came after the former legislators were appointed to Ruto's cabinet.
News
4 weeks ago

Some local party leaders raise concern whether the nominations will be free and fair
Counties
2 weeks ago
Post a comment
WATCH: The latest videos from the Star
by BY MATHEWS NDANYI
Rift Valley
16 November 2022 - 22:00
Read The E-Paper