More than 40,000 pastoralists from Turkana West and Loima subcounties have moved with their livestock to Kobebe

• Lomorukai urged Turkana pastoralists not to migrate with firearms to Uganda while looking for water and pasture. 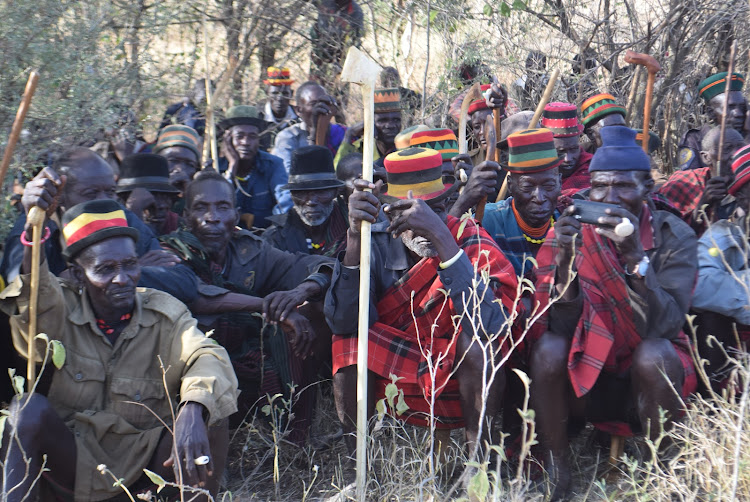 Turkana pastoralists have migrated from Loima and Turkana West subcounties to Kobebe in Uganda in search of water and pasture as drought continues to worsen
Image: HESBORN ETYANG

The prolonged drought has pushed Turkana pastoralists to Uganda in search of food, water and pasture.

Turkana Governor Jeremiah Lomorukai said about 800,000 people are in dire need of humanitarian assistance as drought and starvation persist.

He said the rising rate of malnutrition, with the Global Acute Malnutrition (GAM) in Turkana, is above 34 per cent.

Lomorukai led government officials to Moroto, Uganda, for peace talks after more than 40,000 pastoralists from Turkana West and Loima subcounties moved with their livestock to Kobebe in the neighbouring nation, causing tension.

He held another meeting in Kobebe, which was attended by government representatives and heads of security agencies from Kenya and Uganda.

Turkana pastoralists normally move with their livestock to Uganda during the drought season to share scarce resources such as water and pasture with Karamoja resulting in conflict between them.

“The drought and starvation has forced our people to migrate to Kobebe dam in Uganda. The drought situation in Turkana is real, about 800,000 people are in dire need of humanitarian assistance,” the governor said. 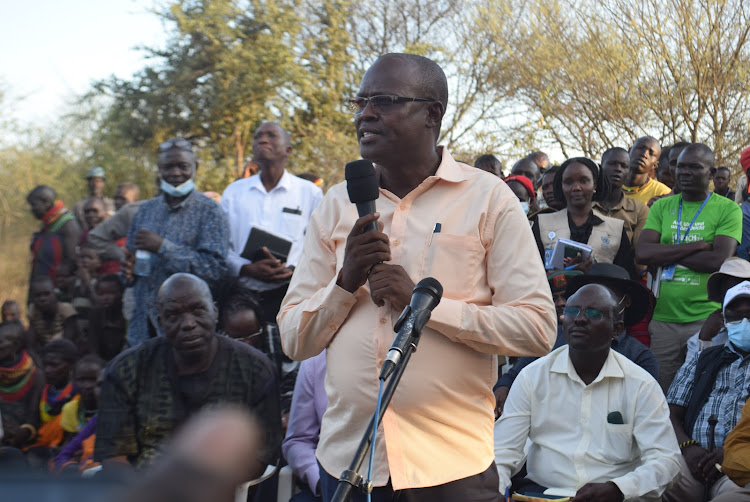 Turkana government officials and Ugandan team led by regional district commissioner Justin Tuko made a commitment to the MoU on the cross-border peace pact signed between Kenya and Uganda.

Kenya and Uganda's leaders agreed to spearhead peaceful coexistence of the two communities and the sharing of existing resources by pastoralists.

Lomorukai urged Turkana pastoralists not to migrate with firearms to Uganda while looking for water and pasture.

“We ask you with respect to abandon conflict. Let go of arms in your possession. It is not allowed in Uganda as well as in Kenya. It is a shame that there is conflict and bloodshed between the Turkana and Karamojong yet we are one people,” he said.

The two communities promised to support an operation to mop up illicit firearms, which will be spearheaded by Uganda People's Defence Force (UPDF).

Lomorukai praised President Museveni for letting pastoralists from Turkana move into Uganda in search of water and pasture.

He said his administration had requested the Ugandan administration to allow them to graze their livestock in the neighbouring country because of the drought crisis in Kenya.

Lomorukai said the Karamojong and the Turkana share a common ancestry and beseeched the communities to live together in peace.

He promised to extend county relief distribution efforts to benefit pastoralists in Uganda.

The governor said his administration will support all measures by both governments to end banditry and promised to invest in programmes to improve the livelihoods of cross-border communities.

He said the county plans to invest in mega dams in Turkana to benefit pastoralists in the borderlands.

UPDF Division Brigadier General Joseph Balikuddembe said leaders had given security agencies permission to disarm anyone found in possession of an illicit firearm.

“You either decide to be a criminal or a pastoralist. From today, any criminal who will raid cows from anywhere and enter any kraal will be arrested,” he said.

“Those with guns, bows and arrows, and their collaborators, including kraal leaders who keep quiet in the face of crime, will be arrested.”

Balikuddembe revealed that UPDF Operation of Usalama kwa Wote, had recovered 620 guns, more than 3,000 bullets and arrested 859 culprits in the Karamoja region.

He said Kenya and Uganda had formed a Joint Defence Committee in October to address issues of cross-border security challenges.

Turkana county commissioner Jacob Ouma promised to deal with cattle rustlers engaged in violence along the border and agreed to a joint collaboration on cross-border security to stamp out illegal firearms.

“The government of Kenya was grateful for Uganda accommodating Kenyan pastoralists and agreed that the generosity made it imperative that the two governments work closely for sustainable peace,” he said.

He proposed that the joint security team target the proliferation of small arms from the region in six months.

Peace meeting held in Kobebe, Uganda, attended by government representatives and heads of security from two countries
News
2 weeks ago

Governor says drought situation is at alarming stage and has affected nearly 800,000 residents in Turkana
Counties
3 weeks ago

Lomorukai gives food donations as drought has affected nearly 800,000 locals in the county
Counties
3 weeks ago

Ruto has termed as the ‘worst’ in four decades the current drought situation
News
4 weeks ago
Post a comment
WATCH: The latest videos from the Star
by HESBORN ETYANG Correspondent, Turkana
Rift Valley
14 November 2022 - 22:00
Read The E-Paper