The Tuesday visit will the President's first to Nyeri county since his election.

• The DP said in a statement last week that his brother’s death has left him shattered. 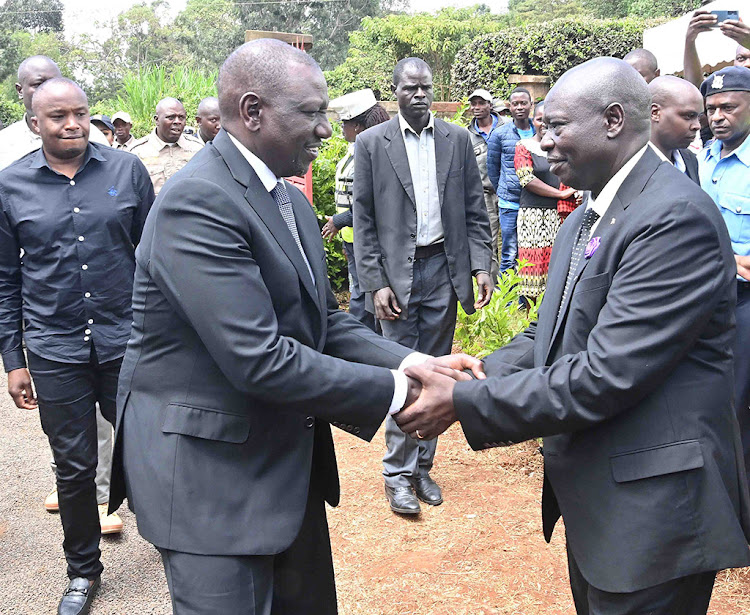 President William Ruto will on Tuesday be in Nyeri county for the burial service of Jackson Reriani Gachagua, the elder brother of Deputy President Rigathi Gachagua.

This will be the first time Ruto will be visiting Nyeri county since he was elected President.

The DP said in a statement last week that his brother’s death has left him shattered.

"The news of your passing hit me hard. I now remain alone among the sons of Kirigo,” Rigathi said in a statement on his official Facebook page.

Gachagua has lost two brothers in a span of five years; former Nyeri Governor Nderitu Gachagua in February 2017 and James Reriani in May 2022.

Nyeri governor Mutahi Kahiga, his deputy David Kinaniri and other leaders on Sunday visited the family at their Mathira home to condole with them.

“The late was a father figure to the larger Gachagua family, a generous and kind man who also paid school fees for the Deputy President,” Kahiga said.

He confirmed via a Facebook post that the burial will take place on Tuesday at his Hiriga home, Mathira constituency.

UDA Legal secretary and Gatanga MP Edward Muriu confirmed to Star that most of the Kenya Kwanza leaders are expected to attend the burial.

Muriu said this will be part of moral support from the team to the DP during the hard time the family is facing.

"I can’t talk on behalf of President Ruto now but what I know is that the Kenya Kwanza team will be there to offer support to our Deputy President Rigathi Gachagua,” he said.

Muriu said that it’s the culture of leaders to support one of their own during trying momemnts.

CS nominees with court cases will be fired, if convicted - Gachagua

Gachagua insisted some of the charges were trumped up for not supporting the government's candidate.
News
1 month ago

Azimio describes the team as “the formal inauguration of a mafia state”.
News
2 months ago

Why Ruto wants to seize Rongai from Kanu

Kimunya, Kega and Kuria out in Mt Kenya; Shabaan, Ojaamong, Kuttuny shown the door too
News
3 months ago
Post a comment
WATCH: The latest videos from the Star
by AMOS NJAU and @Njaumburuh
Rift Valley
03 October 2022 - 10:41
Read The E-Paper