For lack of pasture, goats forced to feed on harvested maize fields, eating too much grain 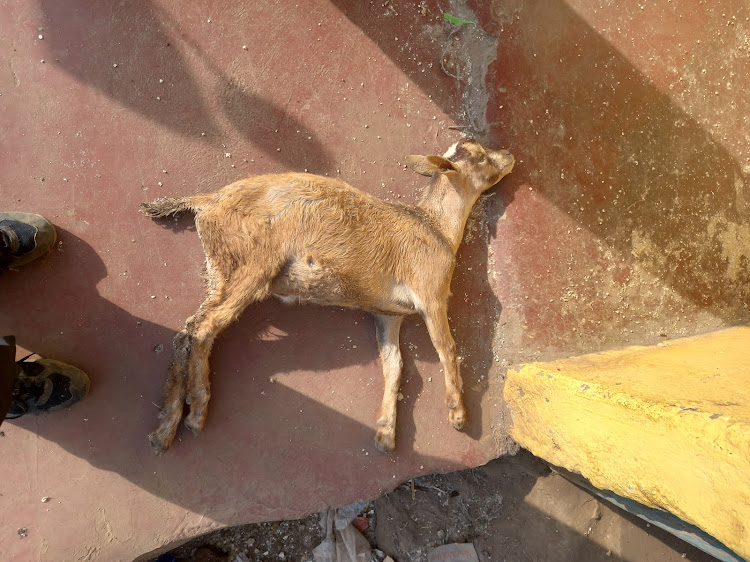 GRAIN OVERLOAD: A Narok dairy goat dies from grain overload. It ate too much fermentable grain and not enough hay and grass.
Image: KNA

Twenty-one dairy goats in Narok East have died due to grain overload, eating too much grain, not enough grass and hay.

Because of the drought and economic problems, farmers in Ntule were forced to let their dairy goats graze on harvested maize fields where they ate the grains of maize, and nothing else.

Veterinary officer Samuel Kirtela said the goats died due to grain overload, too much starch and not enough grass and hay. It causes rumen acidosis, a carbohydrate fermentation disorder.

It leads to slowing of gut dehydration and often death. It can affect all dairy animals.

Two farmers affected said because of the drought they lacked grass and were forced to graze their animals on harvested maize farms.

Farmer Ezekiel Kamoiro said he lost six Toggenburg goats he had purchased for Sh20,000 each at a farm in Naivasha.

“Due to the ongoing drought in this area, the animals were feeding on harvested maize fields. They ate maize grains and died a few hours later," he said.

Kamoiro said each of the dairy goats produced between one and two litres of milk every day, which he sold for Sh100 per litre. The deaths have severely affected his main source of income.

“I purchased two of the goats a few weeks ago to add to my stock so I can have more milk to sell. Goat milk is in high demand here as many people prefer to wean their infants with milk,” he said.

Farmer Seyieki ole Esho lost 15 goats in a week after they fed on a harvested maize farm in Ntulele.

“I was forced to migrate the remaining goats to Sakutiek in Narok North because severe drought has hit this region,” he said.

Kirtela said that the signs of rumen acidosis may include depression, bloat, muscle twitching, unsteady walking, diarrhoea, lack of rumination and teeth grinding.

The severity of grain poisoning, he said, will depend on the quantity of grain eaten and the degree of adaptation of the animal to the grain diet.

The rumen is the goat's first and large stomach.

Treatment is simple. Feed long-stem dry hay, force-feed baking soda and rumen probiotics to repopulate the rumen with 'good bugs'. Treatment should continue for a few days until appetite improves and manure stabilises.

The veterinarian urged the farmers to carefully introduce grains to their livestock and monitor them carefully.

Grains such as oats and lupins are safer as they have a higher ratio of fibre to starch than wheat and maize.

Some 3,010 livestock including cattle, sheep, goats and camels are targeted.
Counties
2 months ago

The firm aims to give 10 million poor widows in East Africa, 20 million goats
News
4 months ago

Feed will save animals that have not migrated for water and pasture.
Counties
10 months ago
Post a comment
WATCH: The latest videos from the Star
by KNA
Rift Valley
20 September 2022 - 22:00
Read The E-Paper