•They said Narok people should not fall into traps by opponents saying they are dividing people and will discriminate against certain communities in leadership.

• In their final submission At Enoosaen in Kilgoris constituency on Saturday, UDA said they should first consider what running for election will actually do for them. 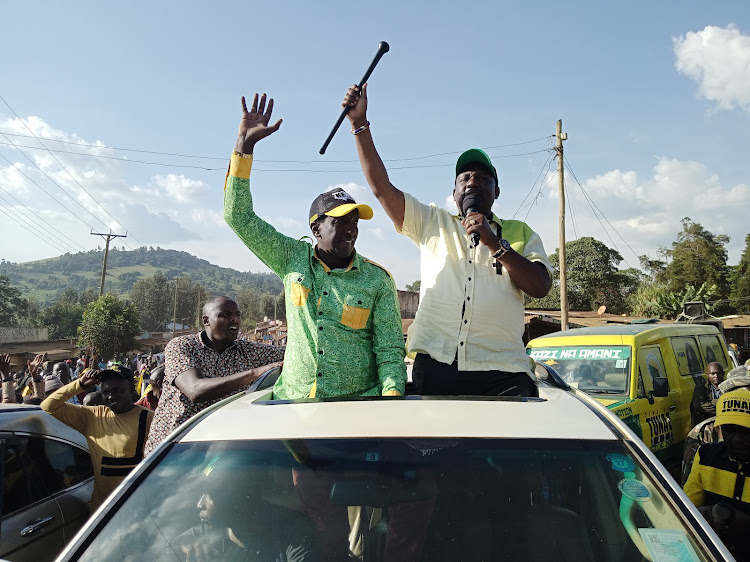 UDA leaders in Narok county have called on the people not to gamble with their future by electing wrong leaders in Tuesday's general elections.

Ntutu is the former Labour CAS.

They accused Azimio of claiming UDA was dividing people and will discriminate against certain communities.

In their final submissions at Enoosaen in Kilgoris constituency on Saturday, UDA said they should first consider what concretely those seeking various seats will do for them.

“We are going to the ballot to decide the future of our people. Our informed decision will determine the direction of the county and the nation socially and economically over the next five years," Tunai said. He is seeking the Senate seat on the UDA ticket.

He said many people will be seeking their votes and they should decide whether they have good intentions.

“We need leaders who are duty-bound to protect the interests of all the people in the county by making wise decisions,” he said.

The county boss added voters should not be blamed by future generations for choosing the wrong leaders.

Tunai said the UDA family’s agenda is to unite all the tribes in the county because without peace there can be no growth or progress.

The outgoing administration has made great strides in development and peace that should continue with the incoming generation.

“My agenda of uniting all the tribes in the cosmopolitan county has been my dream, which has seen the county experience peaceful coexistence,” the governor.

Ntutu called on voters to ignore tribes, race and religion and go for competence.

“We need development-conscious leaders who will work for the people while ensuring equal access to better services in  peace and unity,” Ntutu said.

The governor candidate pledged to unite all communities living in the vast county, saying his administration will be all-inclusive.

“Narok is a cosmopolitan county and every community residing here should be accorded free space to exercise their constitutional right of seeking representation without considering tribal background," he said.

Pledges to improve road networks to open up the area for massive economic takeoff.
News
2 months ago

Odinga edged to 42 per cent while the DP climbed to 39 per cent.
News
2 months ago