Farmers are using more chemical fertilizers which is acidifying their soils. 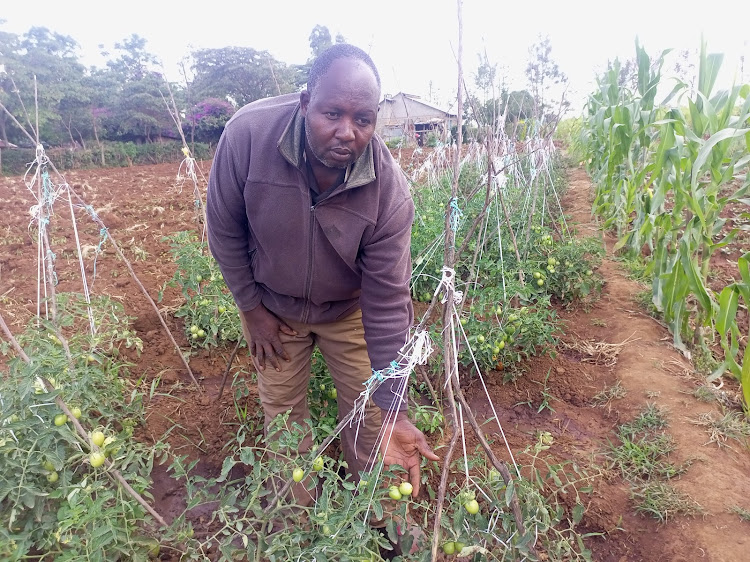 SOIL NUTRIENTS A tomato farmer in Rongai Sub-County of Nakuru shows his crop which is doing poorly due to soil nutrients depletion.
Image: LOISE MACHARIA

Jane Wambui, a farmer, has always cultivated tomatoes on her four-acre piece of land in Kabazi with little farm inputs.

It is until 1994 that her harvests started dwindling, forcing her to increase the amount of fertilizer during planting to almost four times.

As if this was not enough, she also had to double the foliar sprays before the first harvest for the production to make economic sense.

Over time, the need to increase input has also increased every year.

Wambui says that due to the monocropping of tomatoes in the area, a manifestation of pests and diseases have invaded the former fertile lands characterised by highly arable black loam soil.

Wambui’s situation is replicated in many other families across Subukia, Kabazi, Solai and parts of the Rongai areas which used to produce thousands of crates of tomatoes that supported two tomato canning factories in Kabazi and Njoro.

She adds that her family and neighbours live in poverty despite living next to a river with a sufficient water supply because the land is not good enough to grow maize or even vegetables due to soil nutrient depletion and degradation.

“We have since moved to grow maize for the past 12 years with only small portions of tomatoes because we do not have the financial power to feed them with the needed portions of fertilisers and chemicals but even the maize is not producing the desired targets,” she says.

In Rongai, Peter Yele says he has since abandoned commercial tomato farming and started growing vegetables such as kales, black-night (managu) and spider-weed but still there is no production unless he pumps fertilisers on his plants. 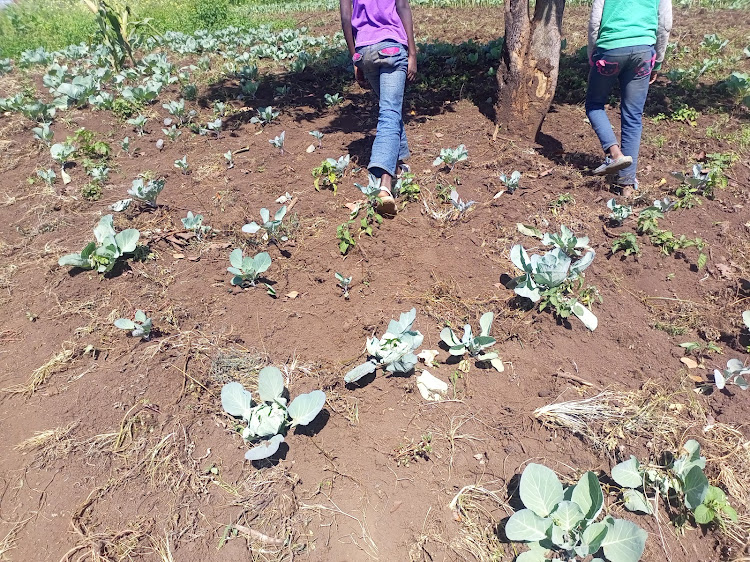 “I do not want to argue with science which encourages crop rotation to cure soils that have been nutritionally depleted but this tactic is not working for us here in Rongai where the problem of depletion is compounded by unfavourable weather,” he says.

The farmer who was growing tomatoes on his entire land can only manage to plant a quarter acre with the rest of the land being under maize and vegetables.

Yele notes that Rongai is a semi-arid area coupled with soil nutrition depletion and degradation caused by the overuse of agro-chemicals and if the government does not take measures to help farmers recover the soil, food security in Kenya will be a pipe dream.

He adds that despite having the benefit of a constant water supply for irrigation, his harvest is reduced due to soil nutrient depletion and degradation.

“It is very hard for farmers to break-even for farmers due to the need for large amounts of fertilisers and the government most often comes late or is too little for all farmers to benefit,” he says.

The story of losses spreads to Mau Narok which is a big producer of horticultural products such as peas, carrots, potatoes, cabbage, tomatoes and spinach and others.

Margaret Nyamoita, a carrot farmer says she has suffered major losses in the past two years due to Cavity Spot disease after her soil got infected.

“I was advised to plant something else on the land or leave it for some time to allow the soil to heal. But I had to plant on the same piece because I do not have an alternative land neither could I try potatoes or peas because they require bigger capital,” she says

Nyamoita petitions the government to subsidise farm input, especially fertilisers which have become the third most important item for production after land and water.

“Mau Narok is blessed with great weather and soils, however, land over-use has caused soil nutrient depletion and causing losses to farmers,” she says.

A trader at the Nakuru Wakulima Market, Peter Njuguna says the county can no longer grow sufficient tomatoes for its domestic consumption leave alone manufacturing. 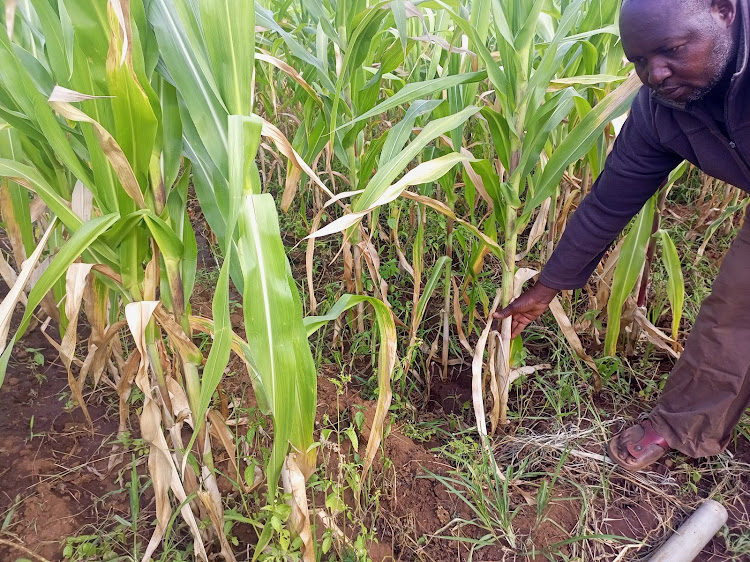 SOIL NUTRIENTS Peter Yele, a farmer in Ronga Sub-County in Nakuru show a section of his maize plantation that is unhealthy despite being under irrigation.
Image: LOISE MACHARIA

“Traders are sourcing their tomatoes in Laikipia and Narok, specifically Loitotoktok while sometimes they go as far as Tanzania and Uganda to get the product,” says Njuguna.

Soil Scientist and Lecturer at Egerton University, Prof. Nancy Mungai explains that farmers have been growing crops which remove nutrients from the soil without adding the recommended rations of nutrients.

“Through farming without adding the recommended rates of fertilisers, farmers are taking more nutrients from the soils than they are adding and of course, there will be depletion over time,” said the Don.

She says the best way to build soil nutrient levels is to use organic sources like manures, composts, crop residues and others.

Mungai observes that the main challenge is that many farmers do not have enough materials to use as organic fertilisers nor the knowledge of the mixtures required.

“Most farmers resort to the use of acid-forming fertilisers such as DAP and Urea for prolonged periods of time and in large quantities causing a noticeable effect on the soil PH, it goes down,” she says. 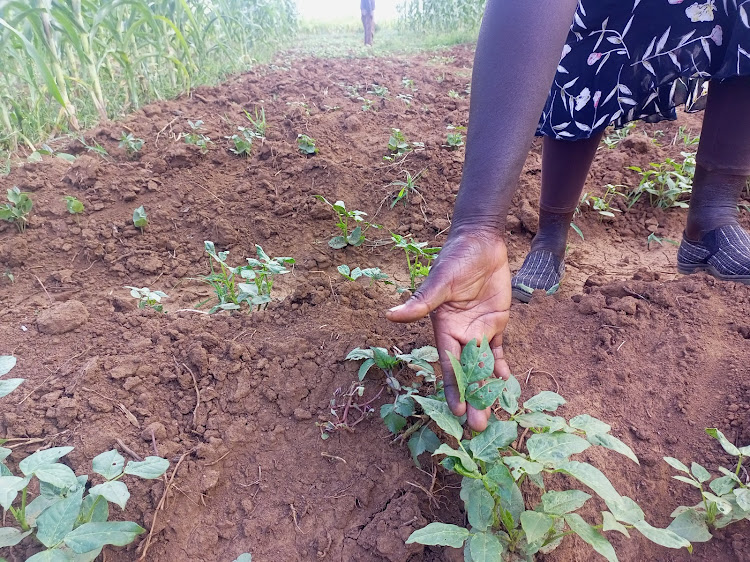 SOIL NUTRIENTS A farmer in Solai displays her cowpeas plants. She says the leave and stalks are smaller and lesser because she added a small amount of fertiliser.
Image: LOISE MACHARIA

She urges farmers to embrace intercropping plants such as cereals and legumes as a way of building up soil naturally.

Mungai also encourages rotation for farmers who practice monocropping saying that it controls pests, weeds and diseases while at the same time ensuring balanced nutrient levels.

Some Non-Governmental Organisations that are pro-agroecology, among the Route to Food, Participatory Ecological Land Use Management Kenya (Pelum) and Seed Savers Network have been opposing the use of fertilisers and agrochemicals.

Route to food maintains that the use of fertilisers and pesticides leads to harmful chemical residues in food and the environment and loss of biodiversity.