• The stoning happened on the same day governor candidates in the region signed a commitment to ensure peace during the August 9 polls.

• The driver of the vehicle and a passenger were slightly injured. 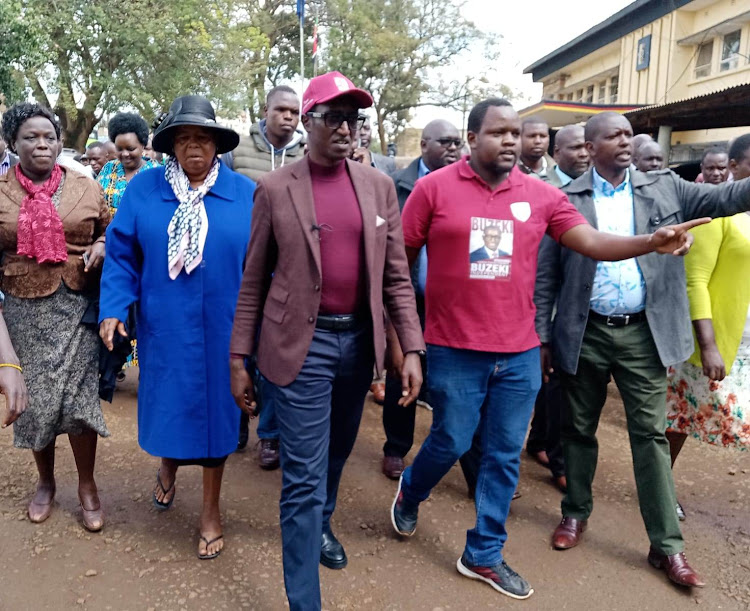 Independent candidate for governor seat in Uasin Gishu Bundotich Kiprop Buzeki (in cap) and his supporters arrives at the Eldoret police station after his vehicle was stoned on July 27, 2022
Image: MATHEWS NDANYI

Deputy county commander Zachaus Ng’eno said the two are helping with investigations into the incident.

The stoning happened on the same day governor candidates in the region signed a commitment to ensure peace during the August 9 polls.

“We are on the matter and will ensure all those involved are brought to book,” Ng'eno said.

He said the driver of the vehicle and a passenger were slightly injured.

Ng'eno warned candidates and residents that police would firmly deal with perpetrators of violence during the election period.

“We want to assure everyone that we are ready for the polls and no one will be allowed to mess up with the peace and unity in this region,” he said.

After the stoning, Buzeki and his team reported the matter to Eldoret police station.

“It's a sad time. The ugly head of 'goonism' has reemerged. Our vehicle that was carrying our campaign director and Kesses coordinator was stoned,” Buzeki said in a statement.

He said those engaging in violence have sensed defeat by his team.

“From what is on the ground, we are winning this seat and our rivals are panicking and that is why they are now engaging in such desperate acts of violence,” Buzeki said.

He, however, said his team is committed to peaceful campaigns.

“We're calling upon all the political actors and our competitors to embrace peace and accommodate divergent opinions. Elections are not about oozing blood, but about winning votes through progressive ideas,” Buzeki said.

He said primitive avenues of attaining political power should be condemned in the strongest terms possible.

Buzeki also claimed that there was a scheme by some local leaders to use intimidation on polling day to scare away his supporters.

“We have already informed the police about the same and we hope action will be taken,” he said.

On Tuesday, Buzeki’s team along with other contenders for the governor's seat, signed a peace accord vowing to ensure peace and unity prevail during the election.

Others who signed the peace accord include UDA candidate Jonathan Bii also known as Koti Moja and UDM's William Kirwa.

“We have pledged to ensure peace and unity for our people because we all need our county and country to remain safe always,” Bii said.

All agreed to promote peace and discourage incitement and violence.
Counties
2 months ago