I'll give Mandago a run for his money, says senator hopeful Kemei

• Kemei, a former radio presenter at Kass FM, vied against Mandago in the UDA primaries and came third.

• Kemei said the position of an independent candidate in the electoral process is provided for in the Constitution. 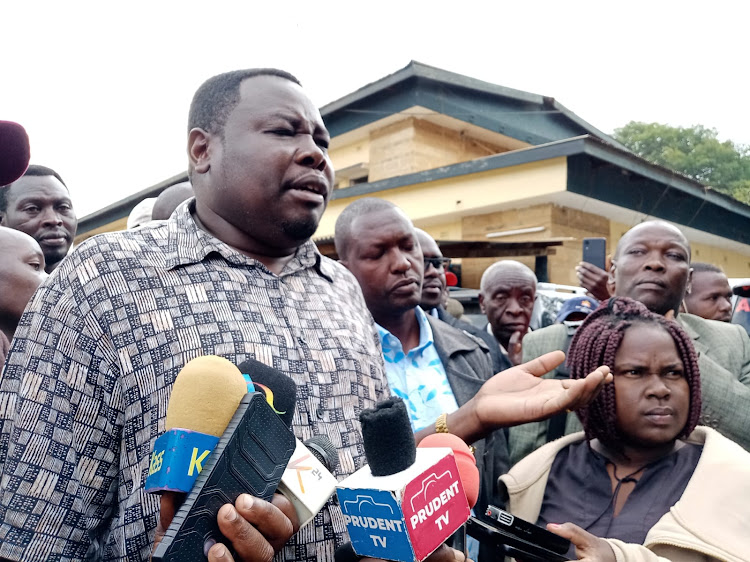 Mandago is running for the Senate seat after completing two terms as governor.

"Come August 10, I'm confident I will be the senator for Uasin Gishu and not Mandago," Kemei said.

He spoke at the Eldoret Central police station where he joined governor independent candidate Bundotich Buzeki to condemn a recent incident in which Buzeki's campaign car was stoned.

Kemei, a former radio presenter at Kass FM, vied against Mandago in the UDA primaries and came third.

"Those perpetrating violence have sensed defeat but we urge our supporters to remain calm for the remaining few days to the polls," he said.

Kemei said all candidates signed the election code of conduct to facilitate a peaceful election.

Deputy President William Ruto and UDA candidates in the region have teamed up to push for six-piece voting in favour of the party.

"We should not entertain the so-called independent candidates because they are just agents being used to undermine UDA," Mandago said.

But Kemei said the position of an independent candidate in the electoral process is provided for in the constitution.

"We are not in any way linked to any party, be it Azimio or Kenya Kwanza," he said.

Kemei and Buzeki are among tens of independent candidates running against UDA hopefuls in the region.

A major battle between independent candidates and those of UDA is expected in Uasin Gishu, which is DP Ruto’s home county.

DP Ruto and his team have been campaigning for six-piece voting for UDA candidates.

MPs who did not join UDA but are running as independents in Uasin Gishu include Dr Swarrup Mishra of Kesses constituency, Silas Tiren of Moiben and William Chepkut of Ainabkoi.

Other seats where independents have threatened dominance over UDA include in Nandi Hills, where area MP Alfred Keter is defending as an independent against Benard Kitur of UDA.

In Mosop, MP Vincent Tuwei is battling for the seat with UDA's Abraham Kirwa.

Independents wave not subsiding, if anything, it's energised after rebuffing Ruto.
Counties
6 months ago

He's been vocal on farmers' welfare; she's an academic and shrewd grassroots organiser,
Counties
6 months ago