• Two retired civil servants team up as independents to run as Kericho governor and deputy, say they will make good use of resources and save county from poor governance.

• The technocrats are experts in infrastructure and agriculture. 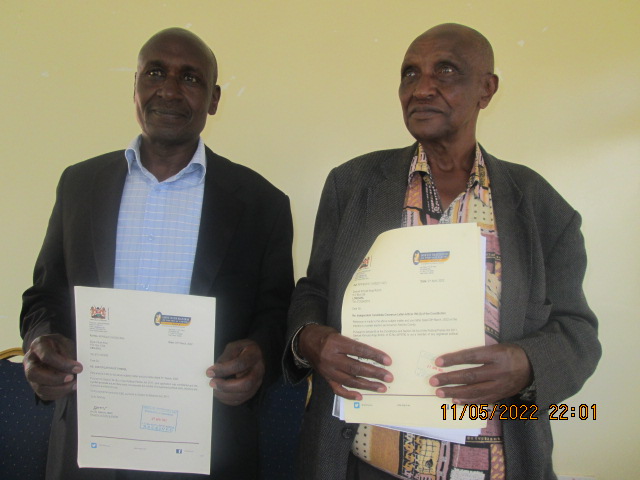 NOT TOO OLD: Independents engineer Samuel Rotich from Kipkelion and his Soin-Sigowet counterpart engineer Elijah Kirui Maru display their clearance certificates to run as governor an deputy governor.
Image: BY SONU TANU

Two civil servants have formed an independent ticket to run for Keriho governor and deputy governor.

Engineer Rotich is a former Kipkelion MP and assistant minister for Public Works. He also served as public works engineer in charge.

He won the larger Kipkelion seat in 1997 after defeating incumbent Bishop Danied Tanui.

An agricultural scientist, engineer Maru served as Agriculture director in Kericho and other parts of Kenya before retiring last year to venture into politics.

Engineer Rotich and Engineer Maru said they respect Deputy President William Ruto. Rotich said he had worked with the DP before and knows him well.

Speaking to the press at Anglican Church of Kenya Grace Conference on Saturday, the independents said they have vast experience that will improve the economic well-being of county residents.

“As an engineer of roads and other infrastructure, I am capable of turning around the economy," Rotich said.

He said he and Maru are better placed to bring down high poverty levels as they are experts in infrastructure and agriculture.

The Ethics and Anti-Corruption Commission and the Independent Electoral and Boundaries Commission have given the due a clean bill of health.

He said food and water shortage should not be plaguing the county that has abundant rainfall and fertile soil.

“The Sh8 billion is significant money and if put to good use we can start micro industries, spur agricultural development and make life better for our community," Rotich said.

In the past, he said, there was no national government Constituency Development Fund or the Sh8 billion but leaders built schools and improved agriculture.With those resources they can do much better, he said.

“I am not here to earn any salary but to spur the economic well-being of Kericho residents. If I don't residents can recall me and elect another governor to deliver poor service."

Kericho likely to get two academics as MCAs

County assembly to have two PhD holders elected as members
Counties
1 month ago
“WATCH: The latest videos from the Star”
by SONU TANU
Rift Valley
15 May 2022 - 22:00