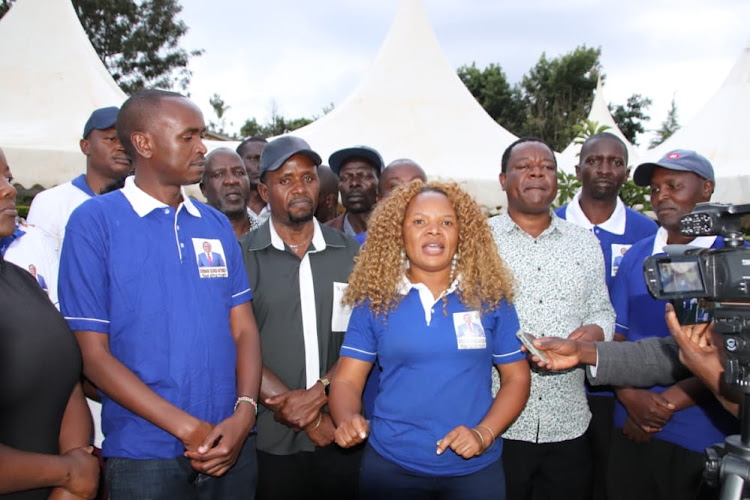 Kenya National Union of Teachers and the Kenya Union of Post Primary Education Teachers in Trans Nzoia county have endorsed the governor bid of George Natembeya.

Union officials said they are fully behind the former Rift Valley commissioner due to his track record in the civil service for 26 years.

The officials spoke on Saturday during a consultative meeting at Levoyage hotel.

“If the Azimio leader Raila Odinga and President uhuru Kenyatta have unanimously endorsed Natembeya, who are we to make a contrary opinion?” Wanjala asked.

Wanjala said teachers have their democratic right to choose who they want to support.

“The leadership of Knut wish to categorically state that teachers have no business supporting an establishment which cares less when it comes to their interests,” Wanjala said.

He urged other professionals not to shy away from supporting Natembeya, whom they said will revive the economy of the county .

Nyangeri said their union has also decided to throw their weight behind Natembeya.

He said teachers’ needs can only be assured if they work with an aspirant who is best suited to address their needs.

“We are not ready to be left out of government this time and we will not accept to remain in the losing  team,” he said.

She said their goal is to ensure all residents enjoy devolution.

“We are ready to partner with an administration that is ready to liberate this county from collapse. We see Natembeya as the best solution for this county, whose resources have been poorly utilised,” she said.

However, a rival group in Kuppet led by the executive secretary Lusweti has voiced support for Kenya Kwanza aspirant Chris Wamalwa.

He said the website was funded by the ordinary citizens who are backing his bid.
Counties
2 weeks ago

He said he picked Bethwel Kirior after consultations with the Nandi Kapurwo clan.
News
3 weeks ago

The governor aspirant expressed concerns on the remarks made by politicians from across the political divide
Counties
1 month ago
“WATCH: The latest videos from the Star”
by DAVID MUSUNDI
Rift Valley
09 May 2022 - 22:00