They will unveil the candidate they are backing in two days. 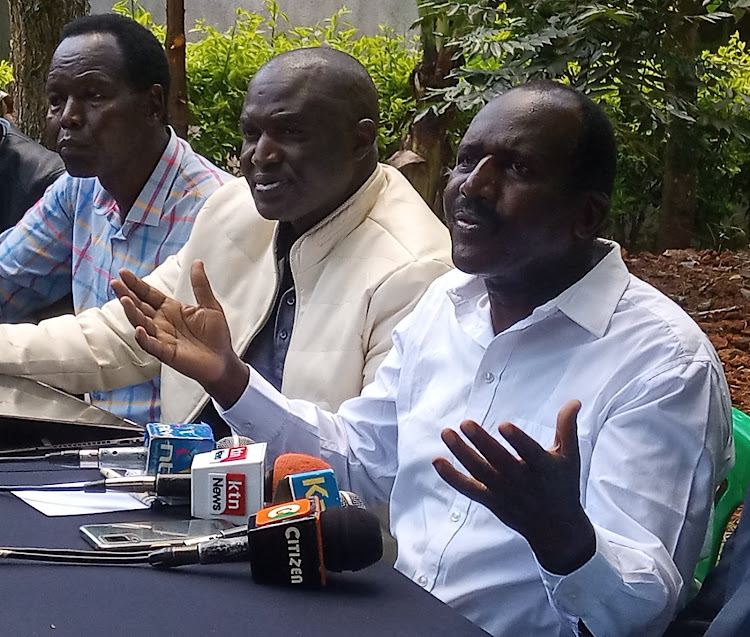 Former Nandi Governor Dr Cleophas Lagat speaking in Nandi after meeting other independent aspirants on May 3, 2022
Image: BY MATHEWS NDANYI

Six independent governor aspirants in Nandi have resolved to support one of them to face Governor Stephen Sang in August.

They said they will unveil the candidate they are backing in two days.

Four of the independent aspirants took part in the primaries on April 14 but rejected the results, claiming that the UDA elections board ganged up with Sang to tamper with the exercise.

Lagat and others who lost in the primaries claimed the results were doctored in favour of Governor Sang.

Sang has however rubbished their claims and questioned why the aspirants should come up with such claims almost a month after the nominations.

During the primaries, Sang was declared the winner after garnering 100,490 votes.  Lawyer Alan Kosgey came second with 48,845, followed by Lagat.

“The nominations were not in any way free and fair or verifiable as had been promised by the UDA elections board. The will of the people of Nandi was robbed by a cartel that messed up the whole exercise,” Lagat said.

He said the nomination results did not reflect the figures of votes cast by residents.

“Those were cooked up nominations that were designed to rob the people of Nandi of their will, and we will not accept that,” Lagat said.

“We will ensure that the will of the people prevails on August 9 because everyone knows how the current regime has messed up the county,” Lagat said.

He said they will not accept UDA bigwigs from outside the county to go to the area and campaign for Governor Sang.

“We want outsiders to allow residents of Nandi to elect their own leaders without being coerced or forced,” Lagat said.

Several other aspirants who lost in the UDA primaries in the county have also opted to vie as independent candidates.

MPs Vincent Tuwei of Mosop and Cornel Serem of Aldai will defend their seats as independent candidates.

The two tallied second in the primaries.

The margins of their loss in the primaries were slim and analysts say the MPs could still reclaim their seats.

Lagat to run for Nandi governor as independent candidate

During UDA nominations, incumbent Governor Stephen Sang was declared the winner
Counties
3 weeks ago
“WATCH: The latest videos from the Star”
by BY MATHEWS NDANYI
Rift Valley
08 May 2022 - 22:00