• Chairperson Joyce Mutinda called for early completion of party primaries to allow time for dispute resolution mechanisms as provided by the law.

• She said it is important that constitutional imperatives for guaranteeing equality and inclusion are backed by sound legislation, administrative rules, regulations, and guidelines. 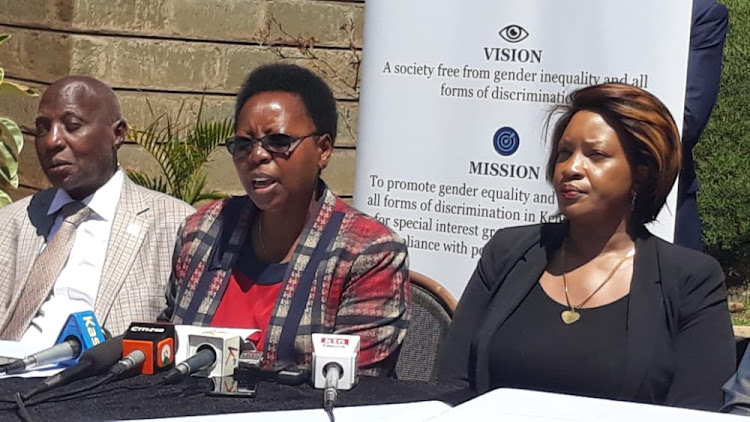 GENDER EQUITY National Gender Equality Commission chairperson, Joyce Mutinda (in the middle) during the press conference in Nakuru on May 6, 2022.
Image: LOISE MACHARIA

National Gender, and Equality Commission (NGEC) has petitioned political parties to set aside a proportion of nominations for elective positions in every county for women candidates.

The commission’s chairperson Joyce Mutinda said also urged the Independent Electoral and Boundaries Commission to be on the lookout for all election malpractices and deal firmly with the perpetrators.

National Gender and Equality Commission has urges elections actors and stakeholders to comply with the principles of equality ahead of the August General Elections.

Addressing the media in Nakuru on Friday, Mutinda prevailed upon party leaders to pledge their support for the two-third gender rule in political representation in elective and appointive positions.

“The parties should allow and encourage Special Interest Groups to register and participate in electoral processes including vying for various elective positions.

In the run-up to the August 9 general elections, several parties including the three main ones namely Jubilee, United Democratic Alliance, and Orange Democratic movement had affirmative action for female aspirants as they paid half the fees to participate in the primaries.

Today Mutinda called for early completion of party primaries to allow time for dispute resolution mechanisms as provided by the law.

“Stakeholders, elections actors and political parties and elections actors should ensure inclusivity during the polls and guarantee that campaigns are conducted in a civilised and secure environment,” she said.

She added that political parties should liaise with law enforcement authorities to provide maximum security to women, youth, and persons with disabilities because they suffer the brunt of electoral violence.

Mutinda said Special Interest Groups that include women, minority communities, youth and people living with disability do not enjoy their political rights yet they constitute the majority of the population.

She accused the National Assembly of failing to enact legislation to promote Special Interest Groups' representation.

She said it is important that constitutional imperatives for guaranteeing equality and inclusion are backed by sound legislation, administrative rules, regulations, and guidelines.

She observed that the electioneering process includes voter education, voter registration party primaries, and not during voting.

According to the organisation, larger part of the region has always been peaceful.
Counties
1 week ago