County gets direct cash transfers of Sh5,000 for 1,750 families for 4 months, and acute nutrition treatment

The drought status in Turkana has been at the alarm stage since November, the National Drought Management Authority drought early bulletin said.

Turkana county government said more than 640,000 people are in dire need of food.

USAID Nawiri in collaboration with county and NDMA will provide unconditional cash transfers to the most vulnerable and undernourished families.

It will support outreach to treat acute malnutrition.

"We are supporting the county response. This drought has gone from bad to worse in the last few months," Hussein Noor of USAID said.

Noor said the Sh44,335,002 million will complement efforts of the county.

It will support 1,750 households for four months and each family will receive Sh5,067 in cash every month.

Noor said it aims to reduce the mortality of pregnant and lactating mothers, and children under the age of five due to increased malnutrition.

Turkana residents had urged the government to give them money instead of relief food so they can buy what they need. 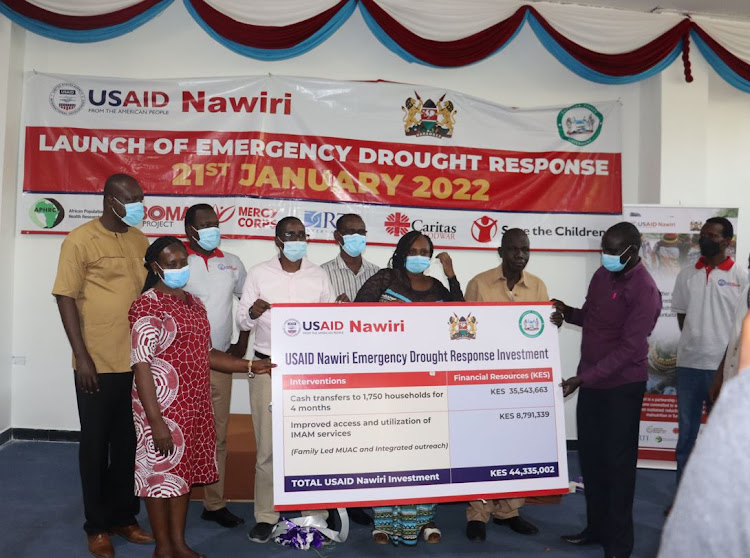 They aid the food distributed by the county is too little and can't help them much.

They urged the county and national governments to emulate the cash transfer strategy used by Kenya Red Cross.

The USAID-funded programme targets 11,082 households, which is equivalent to 66,492 people in Turkana, Baringo and West Pokot counties.

Turkana gets rain, as pastoralists urge government to harvest rainwater.
Counties
3 months ago

Alarm as number of Kenyans in need of food aid rises to 2.8m

This is an increase by more than 700,000 in diverse counties in just five months.
Counties
4 months ago
by HESBORN ETYANG Correspondent, Turkana
Rift Valley
24 January 2022 - 22:00