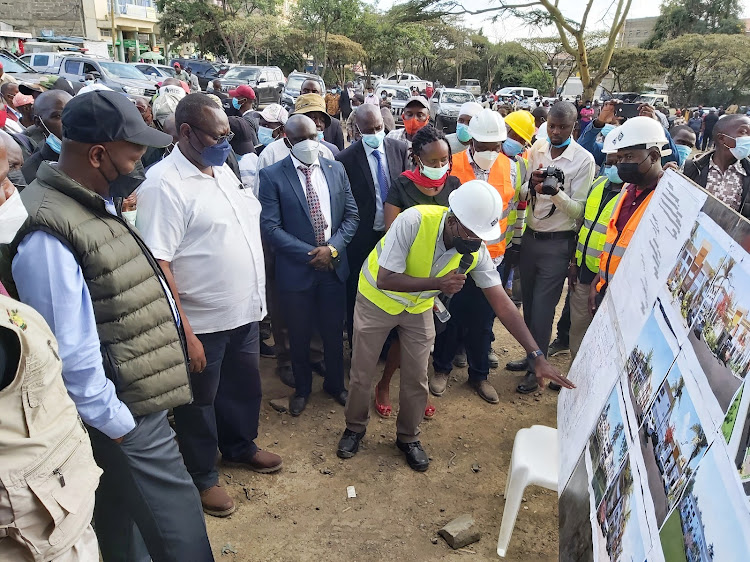 Fishing Nakuru Governor Lee Kinyanjui is taken through the architectural plan for the Sh68m Naivasha municipal park which will be ready in three months.
Image: George Murage

Nakuru county government has announced a fish restocking exercise in Lake Naivasha following a sharp drop in the catch.

While ruling out reintroducing the unpopular fish ban, the county said the only way to address the current challenge in the water body lies in adding fingerlings.

Nakuru Governor Lee Kinyanjui said the lake is critical to the economy of Naivasha because it supports hundreds of residents directly and indirectly.

He said the county would in the coming week enforce recommendations of a task force that was formed last year to address the challenges of the lake.

“We have already introduced enforcement measures in the lake and we shall not reintroduce fish ban but embark on restocking,” he said on Wednesday.

Kinyajui was speaking in Naivasha when he met area leaders and later officiated the ground breaking ceremony of a Sh68 million municipal park.

He said the park, which had been targeted by land grabbers, would be rehabilitated into a modern and environmentally friendly recreational space.

“For years unscrupulous traders have targeted public land in the county but my administration has moved in to reclaim them and hand them back to the public,” he said.

He, however pleaded for a smooth relocation of street families and truckers who previously found a home in the park.

“This park was home to tens of street families and also a parking lot for lorry drivers. We should seek ways of resettling them,” he said.

His Lakeview counterpart Simon Wanyoike lauded the ongoing road rehabilitation in Naivasha town and its suburbs.

“The county has done a lot in terms of road works but we need more kilometres since Naivasha is now a hub of business and tourism,” he said.

During the meetings, Kinyanjui called for a review of Naivasha constituency boundaries next year while also announcing that he would be defending his seat on the Ubuntu Peoples Forum.

“The transportation of cargo from Mombasa to Mai Mahiu through SGR and later to Malaba through the railway has already transformed this town,” he said.

Kinyanjui also intimated that the county had started the process of upgrading Molo and Gilgil towns into municipalities.

“Nakuru has been elevated to a City and this gives room for other small towns like Molo and Gilgil to rise to municipality level which is a major gain to residents,” he said.

Oceans are getting warmer by the day, affecting some marine species
News - Page 9
5 months ago
by GEORGE MURAGE CORRESPONDENT
Rift Valley
12 January 2022 - 22:00