Strategic villages along the Karamoja cluster migratory routes have been covered 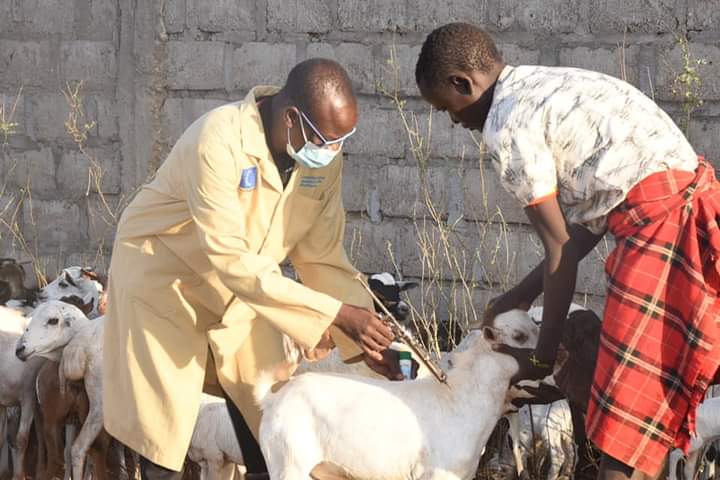 More than 400,000 goats and sheep have been vaccinated along the Kenya-Uganda border.

The Turkana government through the department of Agriculture wrapped up the livestock cross-border vaccination on Saturday.

PPR is an acute or subacute viral disease of goats and sheep characterised by fever, necrotic stomatitis, gastroenteritis, pneumonia and sometimes death.

“The activity has been successful as strategic villages along the Karamoja cluster migratory routes have been covered through the disease control interventions model that involved community disease reporters,” he said.

Longor said there was need to mobilise more resources to tackle PPR disease among other epidemics.

He said plans are underway for similar activities in the remaining subcounties.

Last November, the Turkana government through the Ministry of Agriculture started a vaccination exercise against contagious diseases targeting 60,000 livestock.

About 15,000 livestock were attended to in a supportive treatment and targeted vaccination drive in Kapua, Turkana Central.

Aemun said the areas covered in Kibish were Nayanae -Epuul and Kokuro-Meyan where 17,000 goats were vaccinated and dewormed.

He urged the community to present their livestock for vaccination, adding that the veterinary officers are committed to ensure that a large number of animals are covered.

He also urged herders to regularly participate in public participation forums during budget making process, to champion for increased funds for disease control and other sectors critical to the pastoralists livelihoods.

“The Animal Health Act being worked on by the county government would ensure critical livestock drugs and other essential veterinary services are decentralised to the village level,” he said.

Most animals including drought-tolerant ones died during the prolonged drought.
Counties
2 weeks ago

State to purchase over 1,000 animals in Nyeri and Laikipia counties

The process to be facilitated through the Emergency Livestock Off-take Programme.
Counties
2 weeks ago
by HESBORN ETYANG Correspondent, Turkana
Rift Valley
09 January 2022 - 22:00