They also demand the removal of other university heads in the country, accusing them of mismanagement. 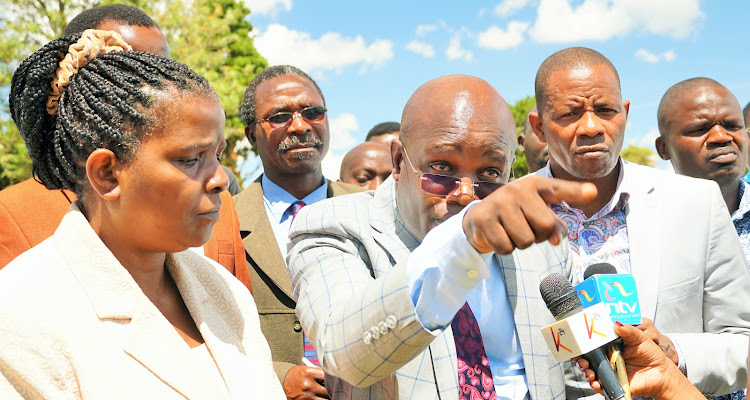 University Academic Staff Union has called for the removal of Moi University Vice Chancellor Isaac Kosgey for running down the institution.

The union officials also asked President Uhuru Kenyatta to send home all vice chancellors of public universities to pave way for investigations over alleged misappropriation of funds running into billions of shillings at the institutions.

“The crisis at the universities is not normal as we are being told. As lecturers, we know the colleges are collapsing because of massive graft by cartels led by the VC," Uasu national secretary general Constantine Wesonga said.

He said President Kenyatta should not watch helplessly as the universities collapse, putting the future of youth in the country at stake.

Wesonga, who was with the union’s national chairperson Grace Nyongesa, said the problems at Moi University were caused by corruption and poor management.

He said that it was not a must that all public universities be run by professors, accusing them of bringing down the institutions through bad governance and alleged embezzlement of funds.

“We have reached a serious point where the universities are completely collapsing," he said.

"The professors who have been appointed to run our public universities are setting a bad example by running down the same institutions.”

The union faulted Prof Kosgey for calling on the students to resume learning at Moi University despite the fact that issues which led to its closure last month have not been resolved.

“The students have to go back home and we are urging parents to ensure their sons and daughters at Moi University are safe at home instead of having them at Moi where nothing is going on,” Wesonga said.

Lecturers at the university are boycotting classes to push for their delayed Collective Bargaining Agreement and remittance of statutory deductions, among other demands.

Nyongesa asked Moi University to implement the CBA it signed with the teaching and non teaching staff, saying that failure to do so was tantamount to contempt of a court order.

“The court has already pronounced itself on the CBA issue when it directed the university management to implement the same after signing it," she said.

Uasu and the other unions representing the workers, including Kenya University Staff Union and Kenya Union Of Domestic Hotels Educational Institutions Hospitals & Allied Workers, have accused the management of ignoring their grievances.

Prof Kosgey however insisted that issues raised by the workers were being addressed.

“We have not ignored the workers. We urge them to be patient as we sort out the challenges we face,” Kosgey said.

The Ethics and Anti-Corruption Commission is currently investigating corruption allegations and existence of ghost workers  at the university.

However, the VC and the university council chairman Dr Humprey Njoroge dismissed claims of graft at the institution, adding the EACC was free to carry out its mandate.

Prof Kosgey said most of the problems at the university were historical and not caused by corruption.

Post a comment
WATCH: The latest videos from the Star
by BY MATHEWS NDANYI
Rift Valley
21 November 2021 - 22:00
Read The E-Paper