The accident, which involved four vehicles, occurred near Maltauro area.

• The 7 pm accident, which involved four vehicles, occurred near Maltauro, area along the busy Narok-Mai Mahiu highway about 40 kilometres from Narok town.

• The accident happened after a trailer speeding downhill lost control and hit head-on with an oncoming lorry before bursting into flames. 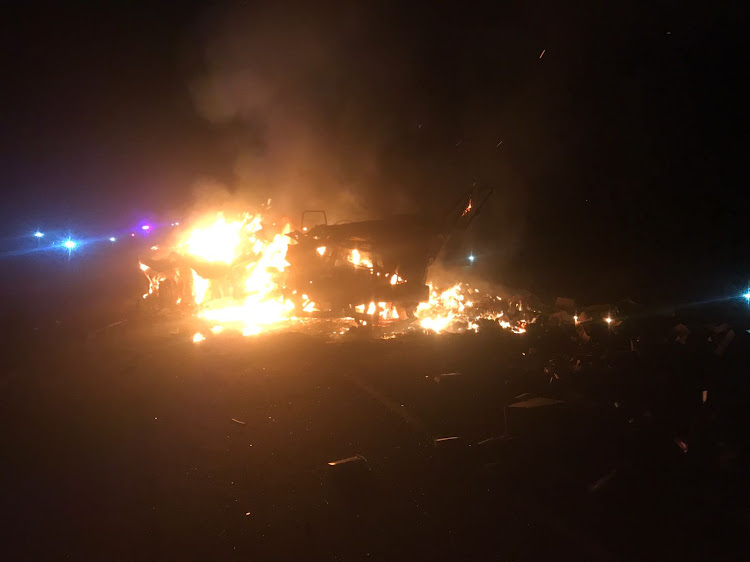 A lorry goes up in flame after a road accident involving four vehicles in Maltauro area in Narok County on Saturday evening.
Image: KIPLANG'AT KIRUI

Four people died on the spot while three others sustained serious injuries after a vehicle they were travelling in was involved in a road accident in Narok County on Saturday.

The 7 pm accident, which involved four vehicles, occurred near Maltauro area along the busy Narok-Mai Mahiu highway about 40 kilometres from Narok town.

According to a witness Benson Mutua, the accident happened after a trailer speeding downhill lost control and hit head-on with an oncoming lorry before bursting into flames.

"I noticed something strange when the trailer overtook me and within a fraction of a second I saw the trailer rolling several times," said Mutua, a tour guide.

The trailer, which was carrying tea leaves, was heading to Nairobi while the lorry was going to Narok before the accident occurred.

The other vehicles involved in the accident were a pick-up and a Toyota Axio.

“The driver of the trailer reportedly lost control of it after hitting bumps before ramming a lorry forcing it to roll, catching fire moments later,” said a witness.

It took the police and members of the public more time to disengage the wrecked vehicles from the trailer so as to get to the mangled bodies.

The injured were rushed to the Narok County Referral hospital.

Sources within the hospital say the patients were in stable condition.

They had head and limbs injuries.

The bodies, which were badly mutilated, were taken to the hospital's mortuary awaiting post mortem.

The area has now turned to be a notorious blackspot after six people were killed in the same spot last week.

issued a seven-day ultimatum to the state to remove bumps which he claimed are now dangerous and have caused several accidents.

"If the state will not heed our pleas, we will remove so as to save innocent lives," said Godfrey Maloi, a local.