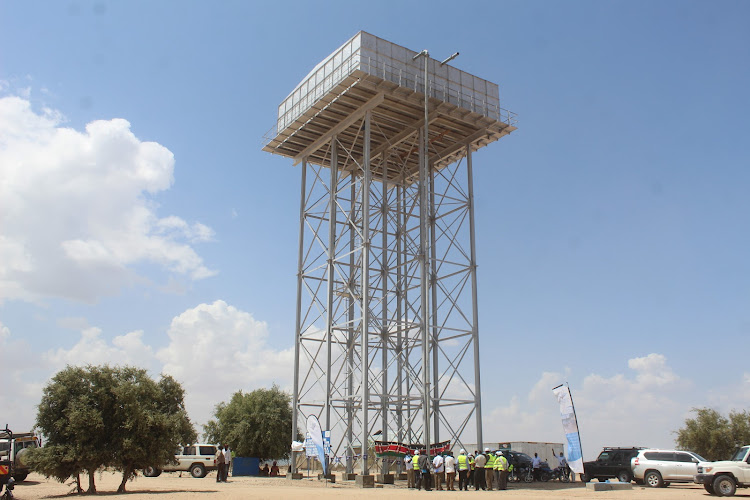 Parched Turkana has been struggling with drought and getting clean water is a challenge.

Turkana has underground water aquifers at Lotikipi Plains and Napuu in Turkana West and Turkana Central, respectively. Most of the county depends on borehole water.

Lotethiro said the project was delayed by Covid-19. It was completed in two and a half years.

“We have assessed the water project and seen it's okay. It will reduce struggles to find clean water," he said.

Other areas still haven't received water, such as Narewa B and other areas but the government is working to ensure they get water.

Turkana chief officer for water Moses Natome said there is a borehole that can get 140 cubic metres from the aquifer. The county also has a six-inch pipeline that draws 1,000 litres per hour and fills the elevated tank.

Andrew Ikenye, the chairman of the national water harvesting authority, said his agency has been working on the project since 2019 but Covid-10 delayed the work.

“We are very happy to hand over the water project to Turkana county for residents to access clean water without struggling and trekking many kilometres," Ikenye said.

In May 2020, Napuu residents protested over the delayed works. The project was launched in September 2019 and was to have been completed in months.

Deputy Governor Lotethiro gave the county water department and the contractor of the Napuu Water project one week to come up with a solution to end the delay.

“We are at pains to explain to the public why the project is not complete and why they have no water, months after the launch. The National Water Harvesting and Storage Authority chairman gave us a time frame and we announced to the people who are now blaming us,” Lotethiro said.

This means hunger and death of livestock will continue in northern parts of Kenya.
News
3 weeks ago

Nakurio Girls and Kerio Boys are facing serious shortage, something affecting their performance.
Counties
1 month ago

Authorities says 640,000 people in the county are in dire need of food
Counties
1 month ago
by HESBORN ETYANG Correspondent, Turkana
Rift Valley
21 November 2021 - 22:00