Uasin Gishu lauded for collecting over Sh1.1bn own revenue 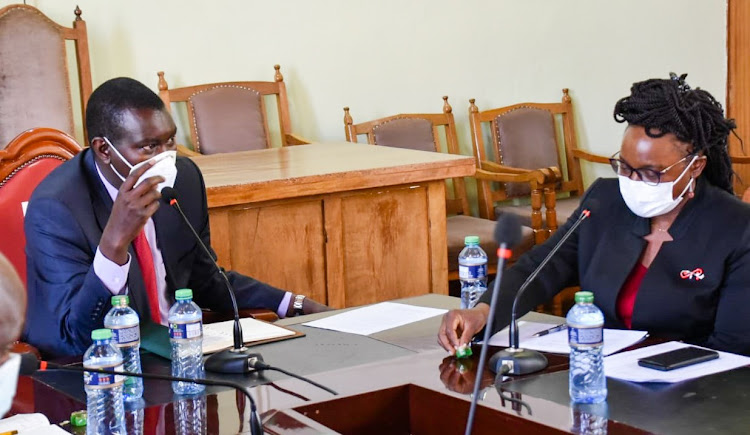 REVENUE Uasin Gishu Governor Jackson Mandago at a meeting with Controller of Budget Margaret Nyakango in Eldoret on 18/11/2021
Image: BY MATHEWS NDANYI

The county collected more than Sh1.1 billion in the 2020-21 financial year. Nyakango said the county for the first time in the last nine years achieved 111.6 per cent collection, having targeted Sh991 million.

“This is a clear show of brilliance as concerns collection of own-source revenue and I want to congratulate Mandago for that achievement," she said.

Nyakang'o said Uasin Gishu is among the best few counties that have done well in revenue collection, adding that it has the potential and capacity of doing even much better going forward.

She also noted progress, quality and impact of development projects in the county, terming them a mark of devolution success.

The Controller of Budget said the county executive was working well with its assembly on implementation and oversight, with each playing its role.

“I have not seen any other county that has allocated offices for the administration as well as MCA in one building so that citizens access all services from one place. This is devolution,” she said while inspecting Kiplombe ward offices on Wednesday.

She also toured the Ziwa Level 5 Hospital where she noted the quick progress of construction and the collaboration with Soy Constituency Development Fund in establishing a Kenya Medical Training Centre next to the hospital.

The college will be used for training staff and students.

The county is also establishing Kimumu-Bahati wholesale market with cold-room facilities, which she also toured and described as a key agricultural value chain infrastructure.

Apart from reducing postharvest losses, it will provide a spacious trading hub away from downtown Eldoret and closer to farmers.

The Mandago administration is working hard to complete all its projects before he exits office next year.

The pending projects include Ziwa hospital that is being developed at a cost of more than Sh800 million.

The governor has asked the national government to help in equipping the facility at a cost of Sh1 billion.