Fishermen say it has led to disruption of the fishing and business sectors which sustain the county. 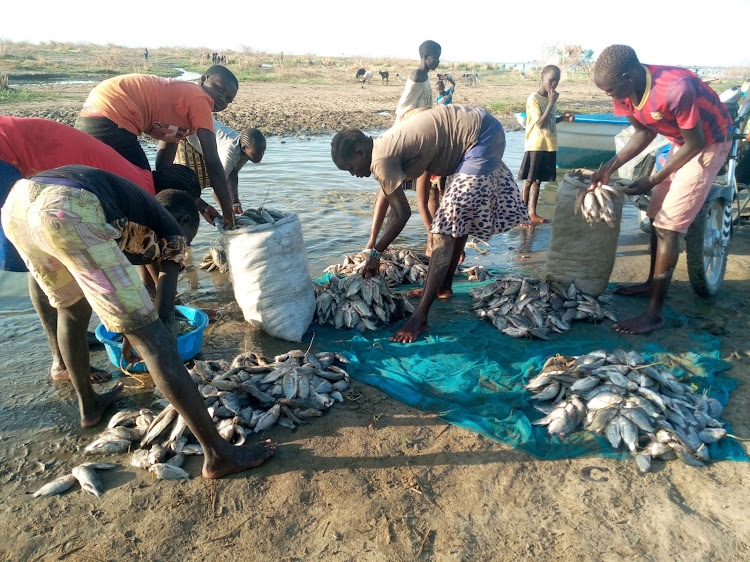 Fisherfolk along the shores of Lake Turkana.
Image: HESBORN ETYANG

Turkana fishermen say the rising water levels that started last year have halted fishing and left their livelihoods in shambles.

They said the situation has prompted fish to move to deeper areas that they cannot access using their fishing gears.

Natirai Beach Management Unit chairman Samsom Loperito said that fishing activities have gone down following the surge of the lake.

Loperito said the swelling has disrupted the fishing and business sectors that boost Turkana county's economy.

“The surge started last year and, since then, fishermen are unable to catch enough fish for sale because fish have moved to the deeper side of the lake,” he said.

He said most of the fishermen don’t have quality fishing gear to enable them reach the deeper side where fish have moved.

“We don’t have quality boats and other fishing gear. We only afford raft boats and wooden boats and that’s why we cannot risk getting to the deeper side to fish,” he said.

He appealed to the Fisheries department and other relevant authorities to provide the required fishing gear to support them.

“In October last year, the water level in the lake surged to unprecedented levels submerging beaches, homes, hotels and government offices," he said.

"We thought the water level would go back to normal but it has not happened and it’s still displacing people.”

Nachuchu said fish dealers are counting heavy losses because they have nothing to sell as it takes too long for fishermen to catch fish at the swollen lake.

“It takes more than a month to fill a lorry with fish to be transported for export. Previously, we would take three to five days to fill a lorry," he said.

He said this has affected their transportation of fish to the Democratic Republic of Congo for sale.

"Dealers from the DRC are the main buyers of Turkana fish, though some are transported to Busia, Kisumu, Kitale and Nairobi," he said.

Nachuchu said they depend on handouts for survival.

The rising water levels in Lake Turkana that started last year has displaced thousands along its shores and destroyed property.

The county said at least 24,320 people living on the shores of Lake Turkana have been displaced.

Residents, including fishermen and traders, have raised concern over the effects of the surge.

The situation has also exposed people to crocodiles and hippos, leading to human-wildlife conflict. There are also fears of waterborne disease outbreaks.