Farmers yet to reap benefits from macadamia farming in Embu 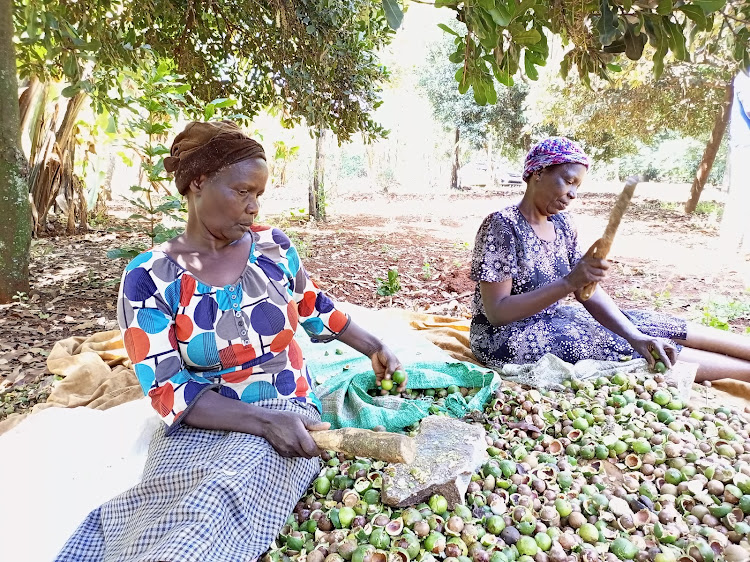 Intercropping coffee with macadamia trees in Embu county gives the area a beautiful canopy and besides the few roadside buildings, one would mistakenly believe that they are driving through a forest with  beautiful flora.

A resident, Grace Wamuchira says to achieve this, it has been a 25-year long journey for most families since they embraced macadamia as an alternative cash crop due to poor coffee prices.

She says families in the area opted for the nuts because at the time a kilo of coffee was selling at between Sh40 and Sh35 while a similar quantify of macadamia was at Sh80 or Sh100 depending on the season.

Wamuchira and fellow women in the region who are the main workers on the farms thought macadamia would offer relief, that their economic status would change but their joy was short-lived.

As the world celebrates the International Day of Rural Women whose theme is Rural Women Cultivating Food for All, the hard-working women in Embu, a largely matriarchal community say they have nothing to celebrate, they are toiling in the farms with nothing much to show for it.

Wamuchira says brokers buy the lucrative nuts at between Sh20 and Sh80 per kilo and wondered why instead of the prices increasing in consistence with other products, it was decreasing and unpredictable.

“The trees take up so much space on our land, the produce is good and the labour intensive but the prices low,” says the woman as she uses a wooden plunk to shell macadamia from the outer green cover.

Nut by nut, Wamuchira and her childhood friend, Grace Wangerwa crush them as they sing Christian hymns ostensibly to coordinate their hammering on the hard nuts.

As if the oppressive pricing is not enough trouble, the women have to incur an extra cost of paying youths to pluck the macadamia nuts to save them from thieves.

“We pay Sh500 per tree for the youth to pick the nuts for us because we cannot wait for them to naturally fall once mature,” says Wangerwa.

She adds picking the nuts instead of waiting for them to fall from the trees once mature compounds their problems even further as they are more prone to aflatoxin infection.

“Last year, I had to destroy more than 200kg of macadamia due to aflatoxin infection and I would like to be taught how to select and store the nuts,” she says. 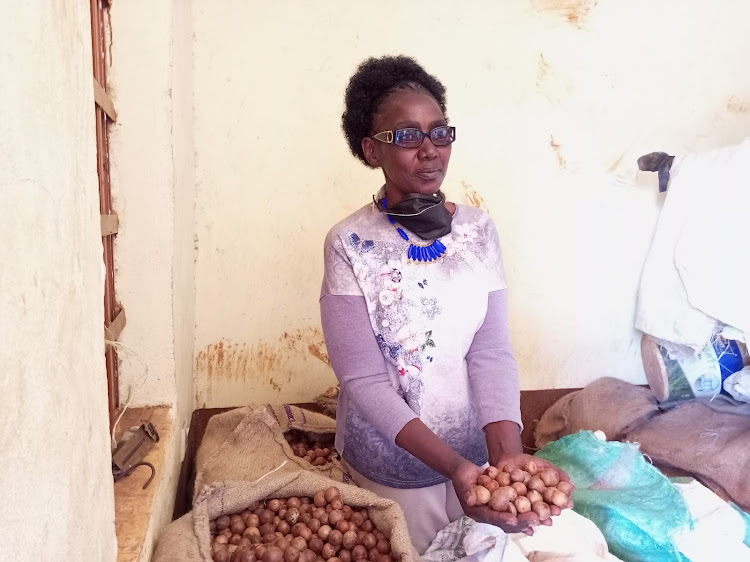 Regardless of the challenges affecting macadamia production in the area, women maintain that they are still hopeful of better times ahead and thus the reason they are keeping the trees.

The women are happy with the presence of the European Union (EU)-funded Market Access Upgrade Program (MARKUP) Kenya which will support macadamia farmers with access to clean planting material and market access.

MARKUP Kenya is implemented by the Unite Nations Industrial Development Organisation (UNIDO) in partnership with the government and private sector.

The programme is working with Kenya Agricultural and Livestock Research Organisation (KALRO) to improve tree nurseries in providing clean planting materials for macadamia, passion fruits, mangoes and groundnuts in 12 counties which include Embu.

Wamuchira and Wangerwa are optimistic that the programme besides educating on using clean planting materials and proper nut production, will also connect them to markets where they would fetch better prices.

“Aflatoxin manifestation in produce causes economic losses as it leads to rejection of consignments and finished products as well as revocation of business operating permits,” read part of the report.

MARKUP Kenya National Project Coordinator Maina Karuiru says the project seeks to improve the welfare of women and youths in the rural areas.

He says the project’s main agenda was to helps farmers form groups and teach them good agriculture practices which will enable Kenya grow, pack and export quality and safe food.