Raila to address rallies in Eldoret on Friday 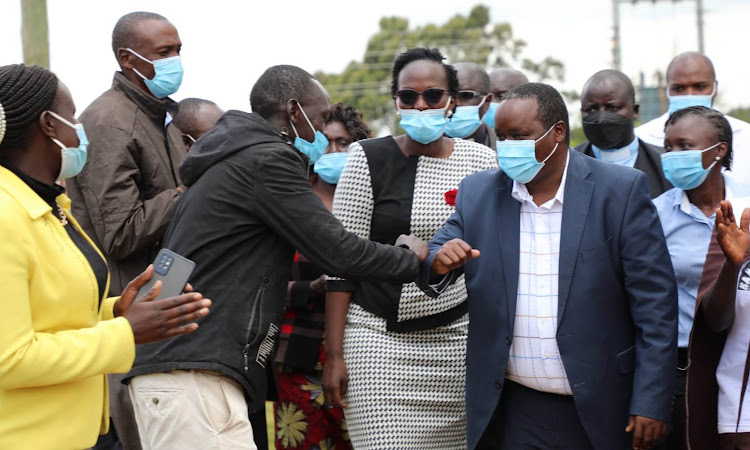 ODM leader Raila Odinga has confirmed his tour of Eldoret scheduled for  Friday where he will address rallies.

Eldoret is the home and political backyard of Deputy President William Ruto.

Raila will meet delegates from five counties in Eldoret to push his Azimio la Umoja agenda before addressing meetings in the town.

“He will hear them and discuss various issues touching on agriculture, business and security, among other matters,” Menjo said.

It will be the first time since the last election that Raila will be in the region where Ruto enjoys wide support, although the opposition chief has a considerable following in the region.

Raila will address two meetings in Eldoret town and at Langas on his way to the Eldoret Airport where he will take a chopper to Mumias for other events.

The ODM boss is scheduled to be in Turkana on Thursday. Governor Josphat Nanok, his former ally, has since decamped to Ruto’s UDA party. Turkana will be his first stopover before he goes to Eldoret for the meetings.

Tolgos is the only governor in the North Rift supporting Raila.

“It’s the same Raila whom we supported in the 2007 election and I see nothing wrong in standing with him,” he said.

The ODM chief is also reviving his networks as he seeks to make inroads in the region as the party is set to reopen all its offices in Rift Valley in readiness for the 2022 polls.

The party, along with Kanu and Chama Cha Mashinani, will compete with the dominant UDA party, which has recruited more than 1.5 million members.

“We will just reenergise operations in all the offices that have been in existence so that we ready ourselves for campaigns ahead of next year’s polls,” Uasin Gishu ODM branch chairman David Songok said.

Songok, an ally of Raila and one of the ODM strategists in the region, said they are preparing for a major political battle for Raila to succeed President Uhuru Kenyatta.

“We are currently encouraging our leaders formerly under Nasa, to come up with a fresh working relationship so that we go to the election together once again,” Songok said.

He warned that the former Nasa parties—ANC, Wiper and ODM—should not risk going it alone because they would give a chance to undeserving opponents.

“In line with this, we urge our leaders Raila, Musalia Mudavadi and Kalonzo Musyoko to dialogue on the wayward,” Songok said in Eldoret.

Both Raila and Ruto are scheming for the top seat with indications that they will face off during the polls.

Post a comment
WATCH: The latest videos from the Star
by BY MATHEWS NDANYI
Rift Valley
13 October 2021 - 22:00
Read The E-Paper