They will get financing, farm input, advice, insurance and market access 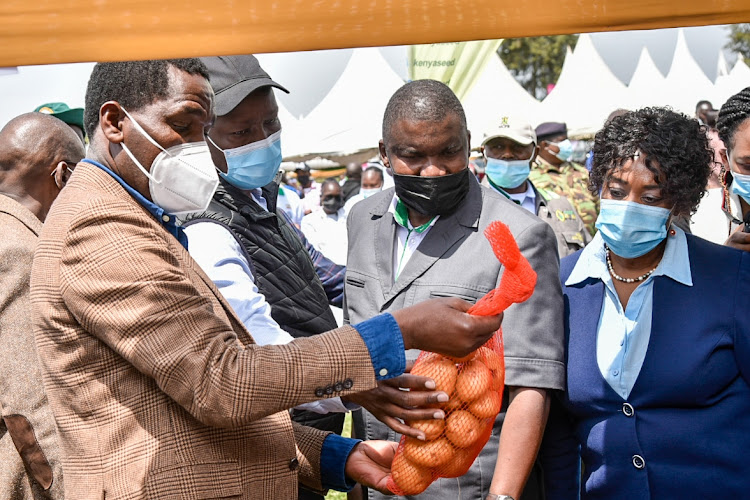 The Nakuru government has signed a Memorandum of Understanding with two grassroots organisations that offer funding to small-scale farmers to scale up farming and enhance food security.

Through the agreement, more farmers will get access to loans and repay upon harvest and sale of their produce.

Signing the MoU, Governor Lee Kinyanjui welcomed the move by the private sector to offer financing and solutions to farmers.

“The government cannot occupy the entire space in agriculture. The government has a role in regulation but also the private sector has a major role, especially in financing and giving solutions to the larger agricultural sub-sector,” Kinyanjui said.

According to Kinyanjui, assisting farmers through financing and guidance could alleviate poverty since they account for up to 60 per cent of the population who rely on agriculture directly or indirectly.

“Financing in agriculture allows farmers who could not include fertiliser to get it. Also when they get that fertiliser, their margin goes up. They will then increase productivity and food security will be sorted out," Kinyanjui said.

He also urged the organisations to train farmers and ensure they invest in the right crops, especially the high-value crops such as avocado where the degree of labour input is manageable and the market is huge.

One Acre Fund government relations lead Kome Makot said the organisation has 534,000 farmers enrolled in their programme and have extended close to Sh5.5 billion worth of input on credit to farmers.

“We are here in Nakuru because we have 3,780 farmers so far in Nakuru county. We operate in Njoro and five other wards where we have given Sh41 million worth of credit this year alone and we are looking to expand significantly,” Kome said.

The organisation has also created market access to farmers by having off-take and buyback programmes for macadamia and avocado and later they will include potatoes and cheer fruit.

Stanley Wambugu Wakahiu, a small-scale farmer who joined Apollo Agriculture in 2017, is a beneficiary of financing through seeds and fertiliser.

Through financing and training, Wambugu has increased productivity on his farm. He, however, urges the county government to create a better market for the produce so that they can repay their loans on time.

The MoU is timely as most financial institutions shun loaning small-scale farmers because of the high risk associated with unreliable climatic conditions that affect agriculture.