His blindness would guard him against temptations to enrich himself through corruption, he says 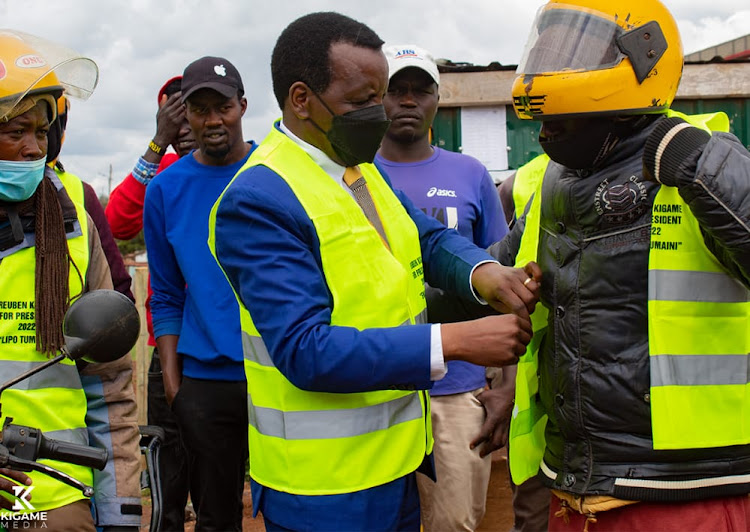 He insists he will vie for the top seat next year through the Federal Party Kenya and would prioritise the fight against graft and land grabbing if elected.

Kigame says although he lives with blindness as a disability, he has capacity to offer value based leadership. An instrumental quality required to uplift the lives of Kenyans including his fellow artists who have been denied their rightful gains through corruption.

He said he would roll out a national campaign to sell his agenda to Kenyans just like other presidential aspirants.

The singer met with boda boda riders and traders on Sunday as he campaigned through Kenya Service, KCC, Kao la Amani and Sukunanga estates in Eldoret.

“Our leaders have good eyes and they see very well. But they want to grab all that they see and use their eyes to perpetrate corruption. I am an ordinary person like you and would like to change lives, if you elect me as the fifth president of Kenya,” Kigame said.

He said the presidency in Kenya had been turned into a preserve for certain families and class of people. He urged residents that time had come to elect a person who would focus on uplifting lives.

The musician said his blindness would guard him against temptations to enrich himself through corruption, unlike other politicians who use the lust of the eye to acquire illegal wealth.

“Thank God I will not use my eyes to admire a lot of wealth or to admire even wives of poor Kenyans like bodaboda riders. I will fight corruption by all means to ensure poor Kenyans get value for their taxes,” Kigame said.

“The lust of the eye is what makes our politicians engage in corruption I want to stop this culture of corruption and ensure food security in our country through level playing ground for all Kenyans,” he added.

Kigame said all other presidential candidates are not able to fight corruption because they are part of the corrupt system that has damaged the country’s economy.

“They have been in power for so long and should not cheat Kenyans that they will fight corruption,” he said.

The singer urged the youth especially boda boda riders not to be misused by politicians during campaigns.

“Avoid those politicians who entice you with Sh50 and elect me as one of your own because I understand better what ordinary Kenyans go through,” Kigame said.

He said since he is not rich to fund massive campaigns he would rely on boda boda riders and well wishers to reach all parts of the country during his campaigns.

“My rivals have a lot of wealth to outshine me with massive campaigns but I will rely on your support which will make me emerge the winner in August 2022 general election,” Kigame said.