• Mwangi studied information science at Moi University but failed to get a white-collar job.

• He has since taken up smart farming, earning money, plans to study agriculture science. 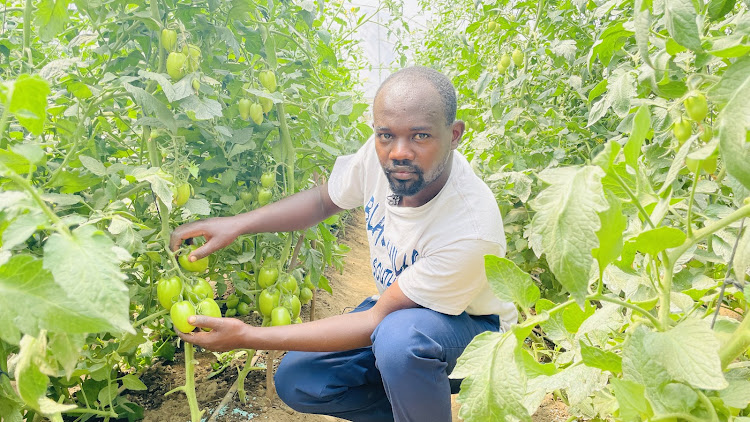 In 2013, Gabriel Mwangi graduated with a Bachelor of Information Science, having specialised in records and archives management.

His aim, like that of most students, was a coveted white-collar job behind a desk.

“After my studies, I knocked doors from one company to the other, expecting gainful employment. Several promises never materialised.

"I became frustrated after tarmacking for over a year, Mwangi, 28, told the Star.

As he was about to give up, opportunity knocked.

“World Wide Fund-Kenya was training farmers in smart agriculture. I immediately enrolled and, as they say, the rest is history,” Mwangi revealed at his tomato greenhouse in Naivasha’s Moi Ndabi.

Mwangi is a member of the Moi Ndabi Maela Kikonyo group supported by partners under Green Horticulture at Lake Naivasha.

Green horticulture at Lake Naivasha is a four-year project (2018-21) funded by the European Union under Switch Africa Green Phase II.

The project is anchored on Kenya’s Vision 2030. The Green Economy Strategy and Implementation Plan promote sustainable consumption and production practices. It connects micro-, small- and medium-sized enterprises to organised markets and financial institutions.

It also has increased the consumption of certified horticulture produce in Nyandarua and Nakuru counties.

The area is dry, so how does he water his tomatoes?

He harvests water from flash floods. He stores it in an eight-by-13 metre tank that holds 10,000 litres.

It's connected to his greenhouse and he uses a solar-powered pump to pipe the water to his plants.

He has 420 tomato plant and each uses a litre of water daily.

“I’m assured of having water from the tank for 20 days," Mwangi said.

He uses drip irrigation to ensure no water is wasted and each plant gets enough.

To further ensure the soil is humid most of the time, Mwangi uses manure, not conventional fertilisers.

Here, a drop of water means a lot.

Mwangi plans to expand his greenhouse.

“I’m planning to expand my greenhouse before going back to school and pursuing agriculture-related courses," he said.

He has no regrets about agribusiness, as it opened his eyes to possibilities.

At first, it was a challenge as his harvest did not meet his expectations.

He didn't give up and got more training. Then he ventured into tomato farming and expect to earn more than Sh250,000 per harvest.

“I sell one kilogramme or Sh80,” Mwangi said.

He has already been trained in sustainable consumption and production. These practices adopt soil and water conservation, use of manure, integrated pest management control, using natural pesticides where possible, and using pre-harvest intervals.

He and others studied marketing surveys and market negotiations so they don't fall prey to brokers through ignorance.

Mwangi said his crops use as few chemicals as possible and only when and where necessary.

“We also test the soil to make informed decisions about what is lacking and what we need to add," he said.

Mwangi said he never sprays excessively and never uses banned chemicals. Whenever a chemical insecticide is used, he won't use anything banned.

He said when they spray with chemicals; they don’t count the first and the last day to ensure chemicals do not land on dinner tables.

Plants are spaced to avoid the spread of disease and pests. They remove infected leaves before the eggs hatch and destroy crops.

They use traps that kill pests. They plant crops such as onions to repel pests.

Mwangi has been successful while more than a third of Kenya's eligible youths have no jobs.

“The smart farm ensures self-employment. Women should adopt kitchen to sustain their families and improve nutrition,” she said. 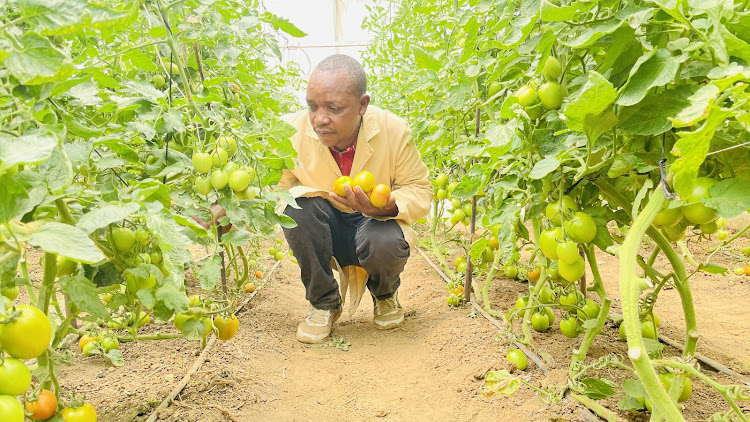 Alex Lemeria is another smart farmer in the initiative.

He plants 500 tomatoes in his greenhouse and sells one kilogramme for Sh50.

He was trained in 2019 to use less space and less water to maximise returns.

Through tomato farming, Lemeria has been able to build a permanent house and open a business for his wife.

“Before Covid-19, we had signed contracts with nearby hotels to supply tomatoes but the pandemic hurt the market," he said.

Lemeria farms the variety known as Anna F1. He said he too uses only approved chemicals and only as little as possible.

The 80 farmers in the project harvest flash flood water, instead of relying on Lake Naivasha, which is under a lot of pressure. The approach is in line with this year's World Food Day.

It is celebrated on October 16 worldwide. This year's theme is ‘Better production, better nutrition, a better environment and a better life.’

The Lake Naivasha Basin Landscape Association, which was founded in 2018, promotes the sustainable management of natural resources.

World Food Day will be marked as more than two million Kenyans go to bed on an empty stomach.

The UN Food and Agriculture Organization said a sustainable agri-food system makes a variety of sufficient, nutritious and safe foods available at affordable prices to everyone.

Nobody goes hungry or suffers from any form of malnutrition.

Pivot devolution movement is the engine for the modernisation of agriculture, and rural economy.
Opinion
2 months ago

Less than 5% get access to formal borrowing.
Business
2 months ago
Why hustling is the way out for youth
by GILBERT KOECH News Reporter
Rift Valley
04 October 2021 - 22:00