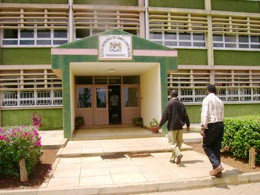 Auditor General Nancy Gathungu in her latest report on the firm says available information indicated that the corporation has title documents for land measuring 727.7 hectares on which the factory stands.

She says Kenya Ordinance Factories Corporation requested the government to allocate it additional 908 hectares to enable it attain the required safety distance for the factory, subsequent to which an allotment letter for additional land was issued.

“The process of surveying the additional 908 hectares started in February 2011 but stalled due to informal settlers who could not allow surveyors access to the land in the buffer zone, which is necessary to ensure safety of the people in the neighbourhood and security of the factory in accordance with International Standards,” says Gathungu in the report.

However, she says all the parcels of land including land registration numbers Kakamega/Sango/1970, LR No.27206/1 and LR No.27206/2 measuring 0.48 hectares, 2,545 hectares and 727.1 hectares respectively have not been valued and included in the financial statements as part of assets of the firm.

However she says the assets register is incomplete and hence the assets value of about Sh2.9 billion can not be ascertained fully.

On the company’s financial operations, Gathungu said it budgeted for revenue totalling Sh1.4 billion during the 2018/19 financial year but Sh1.3 billion was realised.

The corporation also had an expenditure budget of Sh1.4 billion while the actual expenditure was Sh1.5 billion resulting in an over-expenditure of Sh88 million.

The audit report indicates that the corporation recorded an overall trading loss during the period under review which ended June 30, 2019.

The financial statements reflect sales of Sh590.9 million against the cost of sales of Sh1.3 billion resulting in a trading loss of Sh694.1 million which is 117.5 per cent of the total sales.

“The management explained heavy losses incurred was due to ineffective, old and worn-out machines whose performance stands at 40 per cent, hence could not meet the domestic demand of the products,” said Gathungu in the report.

The firm is located next to the Moi Barracks Recruits Training College along the Eldotet-Kitale road.