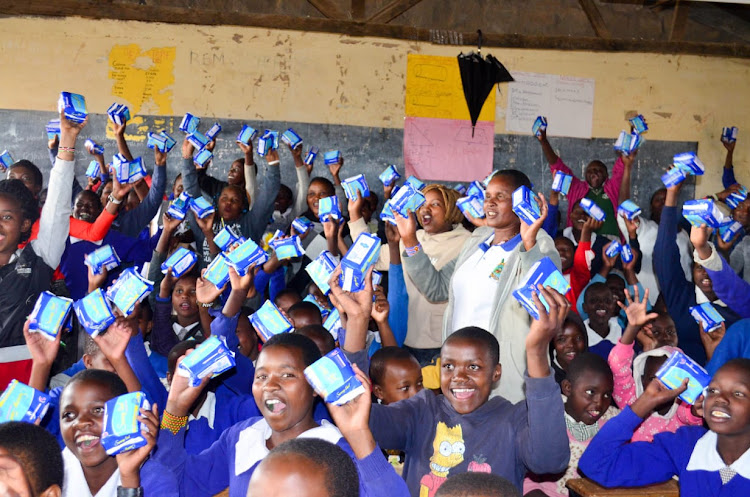 Provision of sanitary pads to schoolgirls to improve attendance has proved to be counterproductive, a new report has revealed.

The study done in Kilifi says even though adolescent girls face challenges that may compromise their chances of completing school, the distribution of sanitary pads and sex education in school has no impact on school attendance.

The report was co-authored by Karen Austrian, Beth Kangwana, Eunice Muthengi and Erica Soler- Hampejsek and published in the BioMed Central Research journal, an open-access journal publishing peer-reviewed contributions from across all scientific and clinical disciplines.

The researchers assessed the effects of sanitary pad distribution and reproductive health education on girls in Std 7 aged around 14 years in three subcounties of Magarini, Kaloleni and Ganze in Kilifi to find out if providing them with sanitary pads would alleviate some of the challenges they face.

Kilifi was selected for the study as it ranked low in both education and reproductive health indicators.

A total of 3,489 girls were randomly selected from 140 non-boarding primary schools that had at least 25 girls enrolled in Std 7.

According to the researchers, Std 7 was selected to allow for observation of the transition to secondary school within the study timeframe.

“The study found that none of the three program packages had an impact on school attendance, however, those that participated in the sex education felt more positive about menstruation, knew more about sexual and reproductive health, had more equitable gender norms and were more self-confident at the end of the program,” the study says.

The government, through the State Department for Gender Affairs, runs a programme to provide free sanitary towels to 3.7 million girls in public primary schools, special primary and secondary schools.

The government-funded sanitary towel program was initiated in 2011 and has so far benefited over 11.2 million girls, mostly in marginalised and slum areas, according to the ministry.

The idea was conceptualised after it emerged that girls from poor families miss 20 per cent of school days in a year due to a lack of sanitary towels.

Data from the Education ministry indicates that a girl that is absent from school for four days in 28 days per month loses 13 learning days, equivalent to two weeks of learning in every school term.

In an academic year (nine months) a girl loses 39 learning days equivalent to six weeks of learning time. A girl in primary school between Std 6-8 (three years) loses 18 learning weeks out of 108 weeks.

Within the four years of high school, a girl can lose 156 learning days equivalent to almost 24 weeks out of 144 weeks of learning.

The project was implemented at Sh470 million during the 2017/2018 financial year.

It is estimated that the Treasury has pumped close to Sh4 billion into the programme to date.

The closure of schools in March due to Covid-19 halted pads distribution.

“Government reports have acknowledged that the supply chain supporting this policy is weak and evaluations have shown that distribution of sanitary pads was not reliable, and girls were not assured of equitable pad provision,” the report shows.

“A cluster randomised controlled trial in rural Western Kenya found that while the provision of menstrual cups or sanitary pads was associated with reduced sexually transmitted infection risk, there was no association with school dropout.”

Daily attendance was taken by community-based data collectors for a period of four weeks (20 consecutive school days) per term, starting  September 2017 through July 2018, for 60 days of observation across three school terms.

In this cluster-randomised trial of evaluating sanitary pad distribution and Reproductive health education in Kenya, neither intervention component, alone or in combination, improved school attendance among girls in the primary grade.

According to the research, the intervention did not translate into improved school attendance, mainly due to other factors related to alternative reasons for why girls miss school.

“While it is likely, and supported in the qualitative literature, that girls experience physical and emotional discomfort during menstruation, it is possible that it is not a direct cause of absenteeism,” it states.

“Quantitative studies assessing reasons girls miss school mention poverty and lack of ability to pay school fees, low value placed on girls’ education and instability in households as the most common causes of absenteeism none of which are addressed through access to sanitary pads or reproductive health education.”

The study notes that interventions addressing these causes might be better placed to affect girls’ school attendance, adding that there is a need to move away from a central focus on school attendance as the central outcome of menstrual hygiene management programs.

Public health expert Dr Richard Ayah says the study calls for the need to come up with research evidence before policy implementation.

“The argument that pads keep girls in school is not tenable hence the need to find another reason for using public funds to buy pads,” Ayah said.