Teams assemble ahead of Laikipia operation on illegal herders 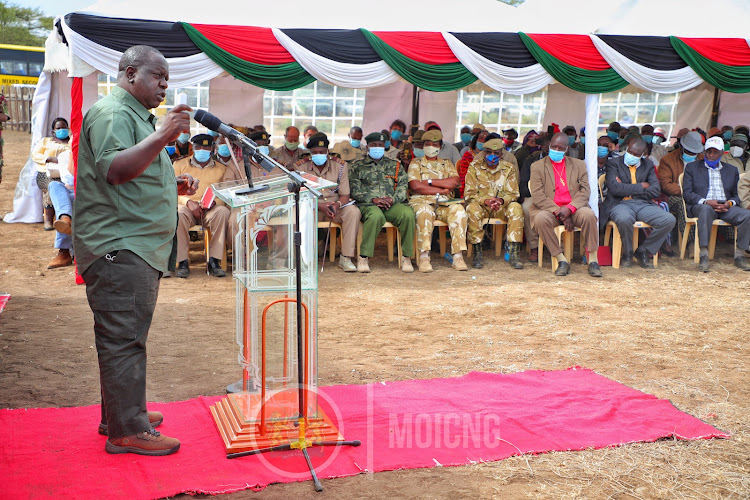 Multi-agency teams have started preparing for an operation to flush out illegal herders in Laikipia.

Security teams were seen assembling at local police camps amid protests and exodus by residents over the attacks.

The state on Monday issued a two-day ultimatum to illegal herders to remove their animals from the conflict zone.

A dusk-to-dawn curfew was also imposed ahead of the operation.

The move came after a meeting of the National Security Council on Monday to review the security situation in parts of Laikipia county.

The meeting noted that the area has continued to witness insecurity as a result of rampant cattle rustling arising from competition for water and pasture, as well as a surge in illegal gun ownership.

President Uhuru Kenyatta chaired the NSC meeting at State House, which is a top security organ in the country.

The meeting was occasioned by reports of a mass exodus by residents over fears of continued attacks.

Interior CS Fred Matiang'i said Laikipia Nature Conservancy and its environs had been declared a disturbed area and a security operation zone.

“All leaders including politicians, businessmen, public officers and others who have illegally moved their livestock into the conflict zone should remove the same from there within 48 hours,” he said in a statement.

Officials said politicians, a judge, senior military and police officers are among those who have illegally moved livestock into Laikipia conservancy.

The NSC meeting came two days after another one by the National Security Advisory Committee (NSAC).

On Sunday, a gang operating in the area killed a man and torched more than 40 houses.

They had on September 3 killed two people in an attack, raising the number of those who have died in the past three months in conflict-related to grazing fields to 10.

The military has also been deployed to the area. Officials aware of the plans said the military will, among other things, give air support to the agencies involved in the operation in efforts to reach the gunmen causing havoc there.

It was noted that other agencies lack the capacity to reach where the gunmen are hiding.

The gang is hiding in gorges in the area and usually come out at night to graze and attack villages before retreating there.

The NSAC meeting also agreed to recruit more National Police Reservists to help with the operations.

Interior Principal Secretary Karanja Kibicho said the government will change tack on its approach to insecurity. This is after various interventions it had deployed failed to restore peace.

“We have tried persuasion and diplomatic approaches in vain. This is a matter we are now taking very seriously,” he said.

He said leaders from the area have previously frustrated peace efforts and warned that the government will implement the necessary decisions arrived at, even if they are unpopular with the political class.

The government had on July 28 given herders, who had invaded private farms in Laikipia, seven days to move out of the county or face forcible eviction. They stayed put, prompting the operation.

He blamed the encroaching herders for violent clashes with local farmers and owners of private ranches and conservancies.

Matiang’i also announced an immediate takeover by security teams of the 80,000-acre Kilmon farm that is owned by the government.

The farm has been a theatre of deadly clashes between armed herders from Laikipia and the neighbouring counties.

The CS further ordered private ranchers and pastoralists to register agreements on access to pasture with the county government beginning next month to enable the government to enforce the pacts and arbitrate bloody disputes around their implementation.

To help pastoralists in the county ease the pressure on grazing pastures and water points, Matiang'i announced that the Kenya Meat Commission, which is under the Kenya Defence Forces, will begin buying around 1,000 livestock weekly starting next week in an off-take deal brokered by the government.

The programme will complement a similar one being implemented by the Laikipia government.