• Drop in catch prompts Nakuru county to ask the Fisheries Institute to consider a ban on fishing and advise. 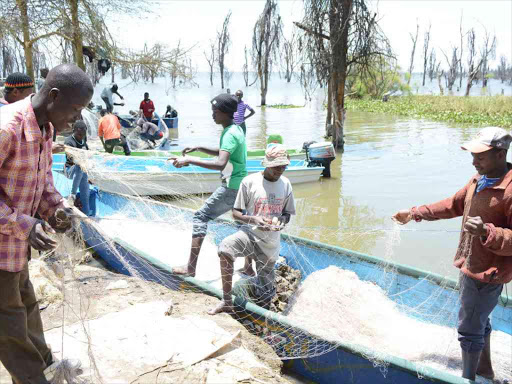 POOR CATCH: Fishermen at the Karagita landing beach in Lake Naivasha where the fish catch has dropped by more than 60^ in two months due to overfishing.
Image: GEORGE MURAGE

Following a 60 per cent drop in fish catch in Lake Naivasha, Nakuru county has asked the government to study the possibility of a fishing ban.

The Kenya Marine and Fisheries Research Institute is studying the issue.

The county cited the increased number of illegal fishermen, the use of small-mesh nets catching immature fish and fishing in breeding grounds.

In the last two months, fish catch has dropped by more than 60 per cent with overfishing and the current cold weather blamed for the crisis.

CEC Agriculture Dr Immaculate Maina said on Monday the fisheries sector was under threat due to the increasing number of illegal fishermen.

She said many workers lost their jobs in flower farms and hotels at the height of the Covid-19 pandemic and joined illegal fishing.

“We are keen to continue restocking the lake to increase fish production and we have engaged the research institute to advise us on the ban and the effects,” she said.

Maina was addressing the press in Naivasha, after meeting a taskforce formed by the Governor Lee Kinyanjui to seek ways of improving the fisheries sector.

“The taskforce has recommended reviewing licensing and the number of boats in the lake and we are keen to enforce them,” she said.

Maina said the fisheries sector had high revenue potential not yet tapped.

“We have formed a multi-agency security team to patrol the breeding zones in Lake Naivasha as one way of increasing fish production,” he said.

He said that arrested tens of the illegal fishermen and impounded 13 boats in the last month.

“We have encountered opposition from those involved through demos but we shall not be cowed by their threats and the operation will continue,” Kisilu said.

The chairman of Lake Naivasha Boat Owners Association David Kilo warned that the fisheries sector was facing collapse due to the use of small-mesh nets.

He said the lake supports hundreds of families.

But catching the popular tilapia was becoming a major problem.

“Fish catch has dropped by over 60 per cent in two months and things could get worse in coming days if the county doesn't implement the taskforce recommendations," he said.