Jubilee to form another coalition for 2022 — Kimemia 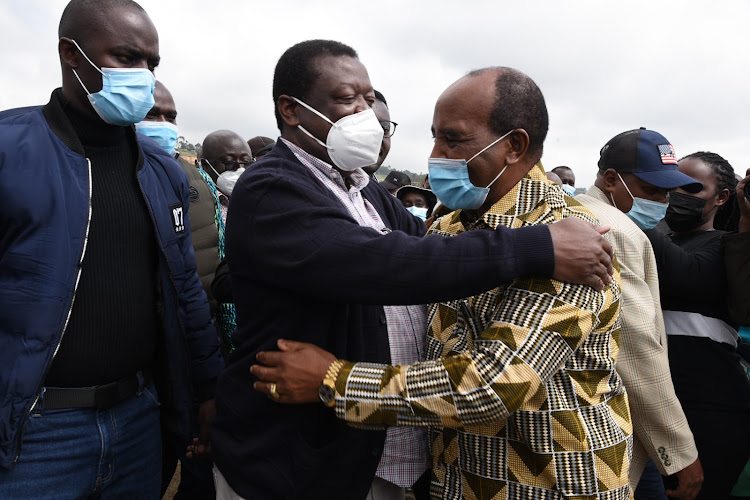 Jubilee will join a political coalition with like-minded parties before the 2022 General Election, Nyandarua Governor Francis Kimemia has said.

Kimemia, who is also chairman of Central Kenya Governors, said on Saturday this was a season of making friendships and creating linkages.

Speaking after a closed-door meeting with ANC leader Musalia Mudavadi, the Governor dismissed claims Jubilee had lost its popularity.

He said the party was reorganising its leadership and would soon restore its glory.

"The party is still strong and open to form a coalition that will position it for a win in the general election," he said.

He added the party seemed to have lost its popularity due to infighting and disorganisation within. He said that would be resolved by removing antagonists from leadership positions.

"We will talk to President Uhuru Kenyatta and advise him to reorganise the party; people who are causing rebellion against Jubilee will be ejected from office," Kimemia said.

He urged people to welcome all the presidential candidates to their regions and choose prudently at the ballot.

His sentiments were echoed by Nairobi Senator Johnsone Sakaja, a founding member of The National Alliance party. It merged with Deputy President William Ruto's United Democratic Party for Jubilee in the runup to 2013 General Election.

Sakaja, who has been accompanying Mudavadi in his tours of the country, said there will be a major shake-up in Jubilee as the members review its mistakes.

Jubilee has lost several by-elections in its strongholds including the recent Kiambaa by-election, a defeat attributed to weakness and loss of popularity.

Members had also gone public, accusing factions within the party of being arrogant and offensive to followers.

Mudavadi has been on a tour of several counties in countries in Mt Kenya, including Nakuru, Nyeri and Nyandarua.

A scramble for the vote-rich Mt Kenya Region is underway as many national leaders have pitched camp in the area.

On Sunday, Deputy President William Ruto is also expected in Nyandarua, even before Mudavadi can completes his tour.