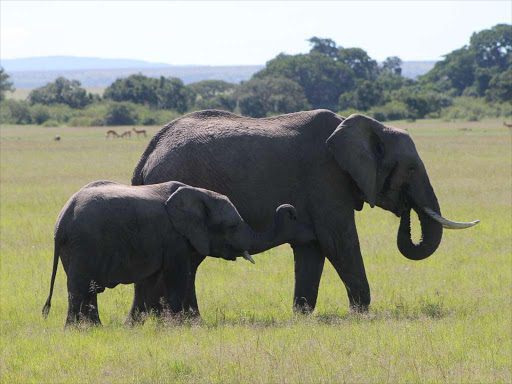 A female elephant and her calf graze around Maasai Mara National Reserve on May 12, 2018.
Image: CONSOLATA MAKOKHA

Poor governance and lack of accountability have been cited as some of the challenges threatening to collapse the Reteti Elephant Sanctuary.

A 10-member task force formed under the leadership of the Samburu East Deputy county commissioner Puis Murugu on May 17, 2021 notes that there was no reporting on revenue performance as the sanctuary accountant is based at Lewa.

“Currently the sanctuary has a deficit of 37 million to fully operate. There was no evidence of revenue forecasting model,” the task force report released July 1 read in part.

The report said there was no analytical review undertaken to explain areas of income stream non-performance.

“The intellectual property for cloud donation is still at the hands of the partner, making the operation of the sanctuary difficult and could not account for all funds allocated to the sanctuary.”

The team further reported that the sanctuary does not have an internal audit team or committee as well as a risk management policy.

The report showed there is no matrix for implementation and follow up of audit recommendations.

"There is a serious mistrust between the community, management boards and partners," it read in part.

The sanctuary is a partnership between the Namunyak wildlife conservancy—one of the oldest conservancies in the northern Kenya corridor—Samburu County government, Kenya Wildlife Service, Northern Rangelands Trust, San Diego Zoo, Conservation International, Task trust, the Nature Conservancy and Save the Elephants among other partners.

In view of the challenges, the task force recommended the formation of an advisory committee at the county level inclusive of the county and national government officials, KWS and partners.

It also called for the review of the Namunyak board structure to include KWS, KFS, National and county government oversight.

The team recommended the roles of partners be re-aligned and the sanctuary to have its own autonomous account where all donor funds are channelled.

It also called for the formulation of clear laws.

The sanctuary in Ngilai West, Samburu East subcounty was established by Namunyak Wildlife Conservation Trust to rescue orphaned and abandoned elephant calves and re-wild them when mature enough.

The sanctuary was opened on August 20, 2016 and it is the first community-owned elephant orphanage in Africa and was designed to benefit the local community by improving their livelihoods.

Conservancies are estimated to contribute about Sh150 million to the economy of Samburu East subcounty and employ over 2,000 people directly and 20,000 indirectly.

Established in 1995, the conservancy covers about 850,000 acres in the Matthews Mountain Range and is recognised as one of Kenya’s best indigenous wildernesses.

General conservancy oversight is managed by an umbrella committee assisted by three distinct unit boards that include members of the community.

Revenue is generated through lodging fees at Sarara camp, treehouse, Reteti elephant sanctuary, Kitich camp and also its conservation fees, which are dedicated to safeguarding its ecosystem and wildlife protection, water resource development, educational initiatives and healthcare resources for the community.

The efforts of the community to effectively balance their needs with safeguarding and preservation of wildlife and nature has made Namunyak a safe home for African wild dogs, gravy zebras, gerenuks, reticulated giraffes, de brazza colobus monkeys and other endangered species.

The conservancy is also experiencing a steady increase in populations of kudus, elephants, buffalos, and other herbivores, as well as rising numbers of leopards, lions and other predators.

The Reteti elephant sanctuary and Namunyak wildlife conservancy deal has stipulated clear roles and mandates between KWS, the local community and partners to ensure smooth operations and management of the sanctuary.

Great milestones have been achieved to date amid numerous challenges experienced in the sanctuary due to conflict of interest between the community, Northern Rangeland Trust and partners.

The problems experienced in the sanctuary climaxed in July 2019 when the community and staff members went on a go-slow which almost paralysed operations of the sanctuary.

Following the challenges experienced, the national government, KWS and partners intervened to save sanctuary by forming a task force.

The four were rescued because they had either separated with their families, fallen into wells or due to drought
News
2 years ago
Post a comment
WATCH: The latest videos from the Star
by GILBERT KOECH News Reporter
Rift Valley
19 July 2021 - 22:00
Read The E-Paper