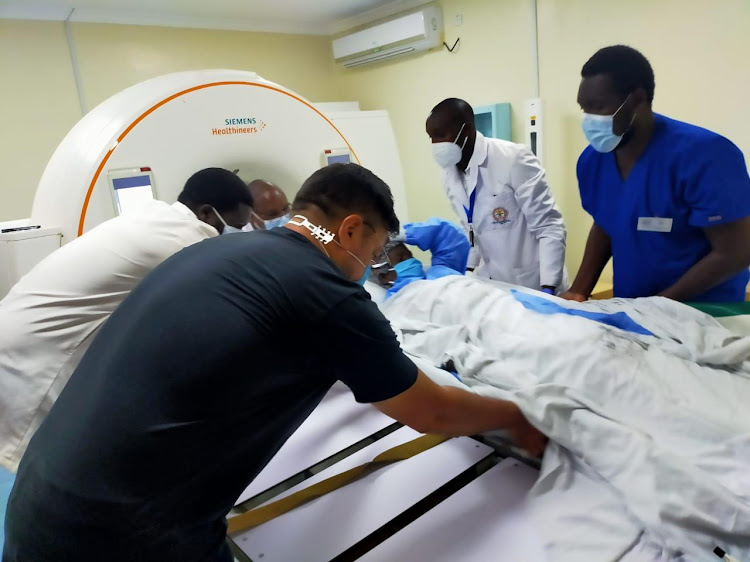 Medics at the Moi Teaching and Referral Hospital administer brachytherapy to a cancer patient on May 8.
Image: BY MATHEWS NDANYI

The Moi Teaching and Referral Hospital in Eldoret has for the first time used the latest mechanism of radiotherapy to treat cancer of the cervix.

Terming the move as great achievement in handling of the cancer patients, hospital CEO Dr Wilson Aruasa said brachytherapy, reduces effects of radiotherapy on the patient.

The method is used to deliver a curative dose of radiation to the cancer while limiting the dose, and therefore reducing the risk of complications, to normal surrounding organs such as the rectum, bowel and bladder.

“MTRH Radiotherapy department just gave brachytherapy for the first time ever to a 57-year-old patient with cancer of the cervix stage 3B. This was done by our able team led by Dr Jesse Opakas,” said Aruasa in a communication dispatched from the hospital.

He said the treatment is covered by NHIF at a cost Sh40,000 per session. The procedure from planning to delivery of the dose of radiation takes two hours per patient.

“We appreciate the support of the Ministry of Health in enabling us reach this stage in cancer treatment," Aruasa said.

Brachytherapy is intracavitary (inside) mechanism of radiotherapy for cancers of the cervix (lower part of the womb) and Oesophagus (food pipe).

The two are the more common cancers in Kenya and leading causes of morbidity and mortality.

The first patient who received the treatment had been waiting since March.

“We have been doing these since January, 2021 for the leading cancers such as breast, cervical cancers,” Aruasa said.

He said cervical cancer was the most common in Kenya, including in the Rift Valley and Western regions.  He said the hospital had upgraded its facilities and services to be able to effectively handle cancer which is currently a leading killer disease in the country.

In Trans Nzoia, only four per cent of  women and girls aged 10 years and above have been screened for cervical cancer.  The county government is currently offering free screening and treatment of the disease.

The county health executive Clare Wanyama says the free screening has been going on for the last one month at various hospitals.

She says they target to have more women and girls screened as part of the war on cervical cancer.