The move followed the recent visit by President Suluhu Hassan.

• Large scale farmers are still holding more than 12 million bags of maize in their stores which may not be sold until after a decline in imports from the neighbouring countries. 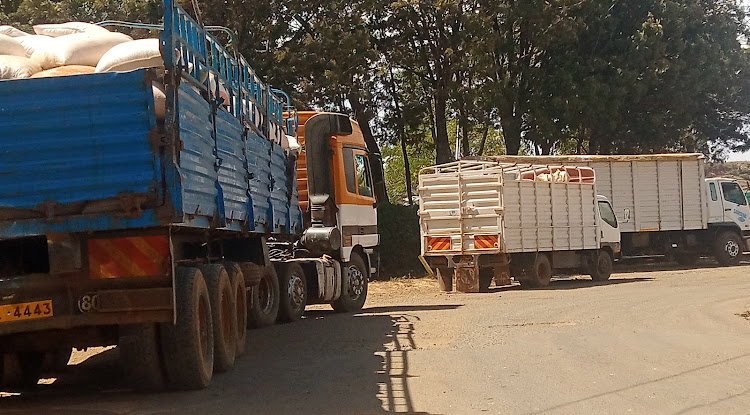 Maize prices have dropped by more than 35 per cent in most parts of North Rift and Western Kenya after the government allowed in imports from Tanzania.

Before the order by President Uhuru Kenyatta to release maize held at the Tanzanian border, retail prices averaged Sh2,800 per 90kg bag, which has now dropped to as low as Sh2,300.

Large scale farmers are still holding more than 12 million bags of maize in their stores, which may not be sold until after a decline in imports from the neighbouring countries.

“The government should move to fully implement the Warehouse Receipting System so that farmers can store their commodity until when the prices are good,” Kenya Farmers Association representative Kipkorir Menjo said.

Menjo said the government should put in place policies that will bring down the cost of production locally.

He said lower costs would help farmers compete with those in Uganda and Tanzania by pricing their products lower but still making profit.

"If such a policy is not put in place then open trade with countries like Tanzania, it will mean more imports and that will hurt our farmers," Menjo said.

Agriculture executives in Trans Nzoia and Uasin Gishu said most farmers planted higher acreage and the harvest quantities are expected to rise.

Early in the year, the rains delayed and farmers were gripped with fear after a drought destroyed maize that had been planted between March and mid-April. Some of the farmers had to replant but will now benefit from the onset of heavy rains.

“Although the rains have delayed for about three weeks, we don’t expect the damage to crops to be very extensive although some farmers have been forced to incur double costs by replanting,” Samwel Yego, the Uasin Gishu Agriculture executive, said.

Yego said the maize crops in most areas were healthy and would even improve further with the onset of heavy rains. The situation will also favour good production of wheat, beans and other food crops.

Small-scale farmers complained that they had been unable to plant because of the high prices of input, especially fertiliser. DAP fertiliser used for planting retails at Sh3,000 for a 50kg bag.

Large-scale farmers such as Joseph Bore in Uasin Gishu complained that costs of fuel, especially diesel, had been higher at about Sh100 per litre, raising expenditures.

Bore said the government should ensure the costs of farm input remain stable.

Farmers are happy with the quality of fertiliser in the markets after the government streamlined imports. They want the prices brought down to affordable levels.

“I delayed planting because I could not get fertiliser because of high costs in the market,”Mary Kimani, a farmer from Kesses in Uasin Gishu, said.

“Due to the Covid-19 pandemic, many small-scale farmers were hard hit and that is why we have to support them so that they are able to grow food crops on their farms and by doing so they will avoid long term food shortages and poverty,” Mishra said.