• Mudavadi was at the home of influential Kesses MP Dr Swarup Mishra where he met local leaders including Ainabkoi MP Wlliam Chepkut.

• Mudavadi urged Kenyans to prepare to pass the BBI Bill at the referendum because of its  "immense benefits", particularly strengthening devolution. 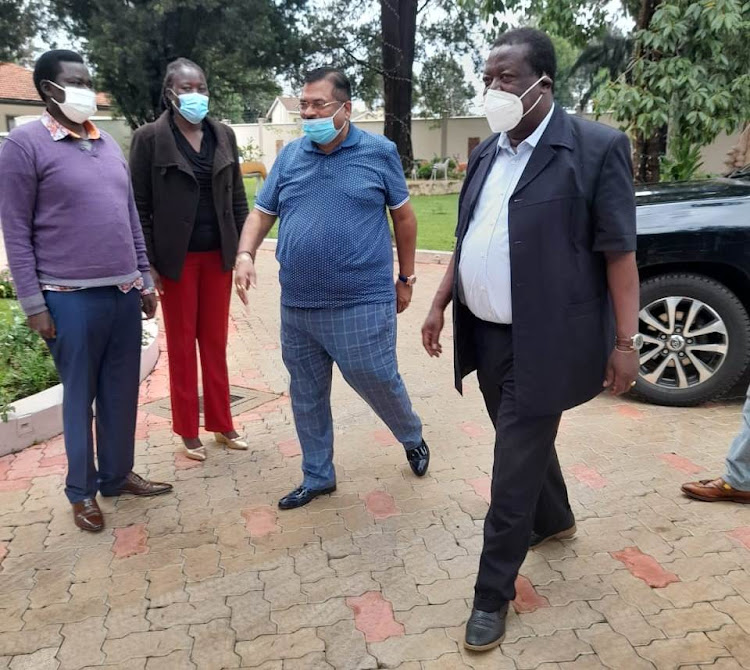 Mudavadi was at the home of influential and wealthy Kesses MP Dr Swarup Mishra on Saturday when he met Ainabkoi MP William Chepkut and other leaders.

“We just met briefly to discuss the BBI in the light of what happened in Parliament — an overwhelming 'yes' vote on the BBI Bill.

They also discussed 2022 politics, as expected.

Dr Mishra was among the  few MPs from Ruto’s backyard who voted for the BBI Bill. Two weeks ago he hosted Baringo Senator Gideon Moi at the same home in Eldoret where BBI and 2022 were also discussed.

The MP is an influential leader in the region and he has openly declared his loyalty to President Uhuru Kenyatta and his friendship with Gideon, Mudavadi and other leaders.

“I am loyal to our President and the people of Kesses whom I have to work hard to empower," Mishra said.

Since January, Mishra has met more than 60 MPs and other leaders at his home.

Last month Mudavadi met Hezekiah Bundotich Kiprop, popularly known as Buzeki, who left MCC because it backed Ruto. He is influential in Uasin Gishu where he plans to run for governor next year.

“I will soon announce the way forward for our people about the party we will use next year but we will also work in coalition with other leaders," Buzeki said.

Mudavadi, who wants to run for President, has been courting leaders to join ANC.

After the meeting at Mishra’s home, Mudavadi urged Kenyans to pass the BBI Bill at the referendum because of its  "immense benefits", especially strengthening devolution.

Mudavadi said the overwhelming approval of the document by Parliament had opened the way for a referendum later this year when Kenyans themselves would decide or reject the constitutional amendments.

“With the BBI, Kenyans will be assured  not less than 35 per cent of the national resources will go to the counties and through that they will benefit more from devolution," Mudavadi said. He was joined by Mishra and Chepgut.

However, counties today have trouble even getting their minimum 15 per cent.