The project, which was launched in September 2019, was to be completed within three months.

• Mary Tioko said they were happy when the project was initiated, thinking it would bring an end to their long treks in search of water. 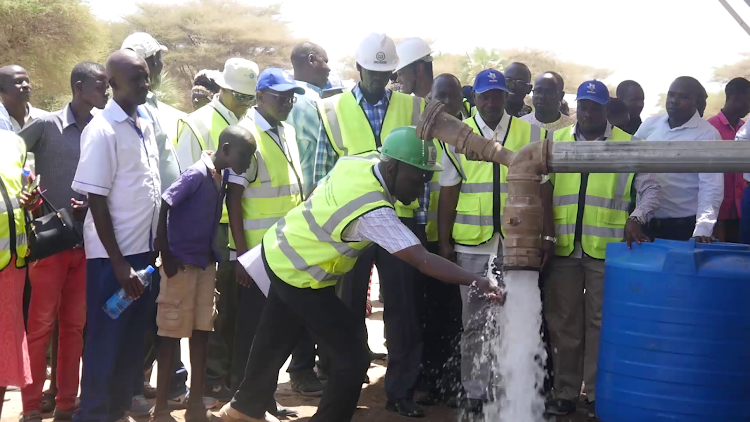 The project, which was launched in September 2019, was to be completed within three months. This has not happened.

Once completed, it will serve 10,000 residents.

“We are worried as a community because the project was meant to benefit us,” resident Jackson Etot said.

He has urged the county government and the contractor of Napuu water project to instal water pipes so residents can get clean water for domestic use and irrigation.

Mary Tioko said they were happy when the project was initiated, thinking it would bring an end to their long treks in search of water.

"We welcomed the project knowing that it would end our water problem, but it has stalled,” she said.

In September 2019, Governor Josphat Nanok and former Kajiado Governor David Nkedianye and the National Water Harvesting and Storage Authority chairman signed an MoU for the project to be completed.

Nkedianye said Napuu water aquifers and boreholes can produce a lot of water.

"We are partnering with the Turkana government to instal an elevated water tank to serve residents, institutions and private investors in Lodwar," he said.

It will also supply institutions such as Kisumu Polytechnic and Turkana University College.

In May 2020, Turkana Deputy Governor Peter Lotethiro said the project had faced delays, but the problem had been resolved. He promised that residents would soon access clean water. That is yet to happen.

In October 2020, Lotethiro gave the county water department and the contractor implementing the Napuu Water project, one week to come up with a solution to end the delay.

“We are at pains to explain to the public why the project is not complete and why they have no water, months after the launch. National Water Harvesting and Storage Authority chairman Erick Okeyo gave us a time frame and we announced to the people who are now blaming us,” Lotethiro said.

He directed technical teams from the county government to engage with the contractor to address the issue.

Lotethiro urged the authority not to commit to timelines before a review of the contract is completed and proposed solutions to end the delays.

When the NWHSA was reached for comment last year an official said, “We are committed and making all efforts to ensure the project is completed by the end of November 2020,”