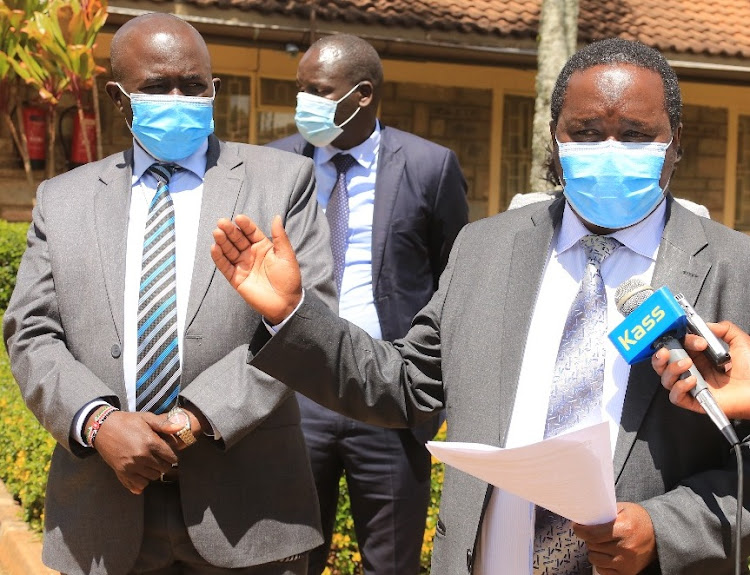 Elgeyo Marakwet Finance executive Isaac Kamar has resigned under unclear circumstances amid feuds in the administration of Governor Alex Tolgos over his succession.

Governor Tolgos effected a mini-cabinet reshuffle following the exit of Kamar, but most of the executives were retained in their dockets.

Kamar said in a social media post that he had quit after accepting an offer of a senior job in the Ministry of Education.

However, other sources privy to the goings-on at the county said he had been pushed out through frustrations by powerful individuals around the county chief. But he is also said to have fallen out with other senior officers.

During his tenure, several officers quit from the Tolgos team, including one of the top advisers, Thomas Karamai, who is among the leading contenders for the governor's seat next year.

“In pursuit of personal aspirations and with the blessings of the governor, I have accepted an offer by State Department for Higher Education on university administration. I appreciate the support extended to me during my tenure in the county executive,” Kamar said.

He added that he would be available for consultations during transition and that he had enjoyed working at the county.

“I really enjoyed working with you all. Looking forward to combining our efforts in other endeavours,” said Kamar.

In the changes made by Tolgos, Anne Kibosia, a former high school teacher, will head the department of Agriculture, while another former teacher Anita Kimwatan will be the executive for Health.

Laboratory technologist Kiprono Chepkok returns to the executive to head the Sports departments, while Kevin Biwott, who is executive for Roads, will act in the Finance docket left vacant by Kamar.

Dr Joseph Kiyen, who holds a degree in veterinary medicine, will head the Livestock, Fisheries and Cooperatives department, while the Public Service Management docket will be headed by Pamela Rono.

Abraham Barsosio will remain the executive for Environment, Water and Natural resources.

The executive for Tourism, Trade and Culture is Shadrack Yatich, while Edwin Kisang heads the Education docket.

Tolgos’s administration is faced with internal wrangles and he currently does not see eye to eye politically with his deputy Wesley Rotich. Rotich is an ally of DP William Ruto, while Tolgos is in the camp of Baringo Senator Gideon Moi.

Rotich has been stripped of his official benefits and no longer uses official cars, support staff and security.

The deputy county chief fuels his car and pays for his travel expenses when out to represent the county. His allowances have been halted.

Rotich is among contenders seeking to replace his boss next year.