Uhuru's Sh30bn projects fast-tracked, some to be completed this year

Rivatex is the only legacy project complete

•The legacy projects are supposed to be in use before President Kenyatta's second term ends.

• They are in the backyard of Deputy President William Ruto who is running for president but is currently estranged from Uhuru and the  Jubilee administration. 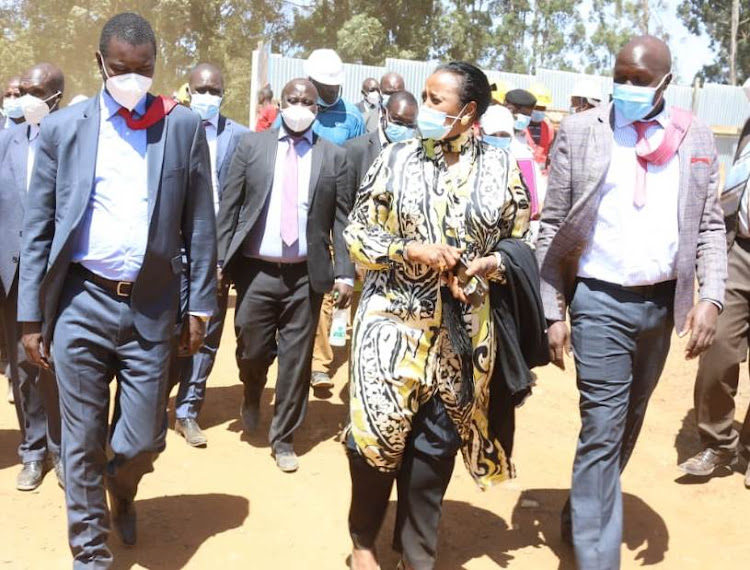 STADIUM INSPECTION: CS for sports Amina Mohamed and governor Jackson Mandago during an inspection of Kipchoge Stadium in Eldoret on January 16, Construction is to be completed by June
Image: MATHEWS NDANYI

Some of President Uhuru Kenyatta’s Sh30 Billion legacy projects in the Rift Valley are to be completed  year's end after they were fast-tracked.

The legacy projects are supposed to be in use before President Kenyatta's second term ends. He has been criticised, however, for not fulfilling is major campaign development promises.

They are in the backyard of Deputy President William Ruto who is running for president but is estranged from the President and the Jubilee administration.

Most of the projects are in water, industry, infrastructure and agriculture and had been delayed because of financing problems and the Covid-19 pandemic.

The Sh8 billion Eldoret Southern Bypass is almost half way done after more than a year of rows over delays in compensating displaced families.

“The bypass project is well on course to be completed in the next few months," Rift Valley regional coordinator George Natembeya said. He has frequently inspected the projects.

The NLC has already paid out more than Sh1.4 billion to the families displaced by the project.

The contractor is completing work on three inter-change connections at Ngeria, Kapseret and Maili Tisa.

Other legacy projects include the Kipchoge and Kamariny stadiums in Eldoret and Iten towns, respectively.

CS for Sports Amina Mohamed was in the region recently to inspect progress of the two projects costing more than Sh2.5 billion. Contractors are on the site.

Uasin Gishu Governor Jackson Mandago says they expect the stadium projects to be completed by June.

Two mega water projects to supply water to Iten and Eldoret towns will be completed by August.

Expansion of the Rift Valley Textile Company (Rivatex) for more than Sh6.5 billion is the main project that has already been completed. It will employ an additional 3,000 youths.

Rivatex is under the manufacturing pillar in the Big Four agenda.

“We are proud of Rivatex as a key industry in this region and we thank the government, Moi University and donors who have invested in its expansion," Mandago said.

Expansion of Sh3 billion water projects for Eldoret and Iten towns is in the final stages.

However work on the Sh1 billion development of the Koitalel Samoei University in Nandi has been slowed since the onset of the Covid-19 pandemic. Little is going on at the site in Nandi Hills.

The college project was commissioned by President Kenyatta more than four years ago.