• In an audit on county use of Covid funds, Auditor General cites serious irregularities in spending in Turkana, Uasin Gishu, among others.

• In Turkana, which received Sh880 million, auditor calls for further investigation of all procurement contracts to identify misuse, waste and possible criminality. 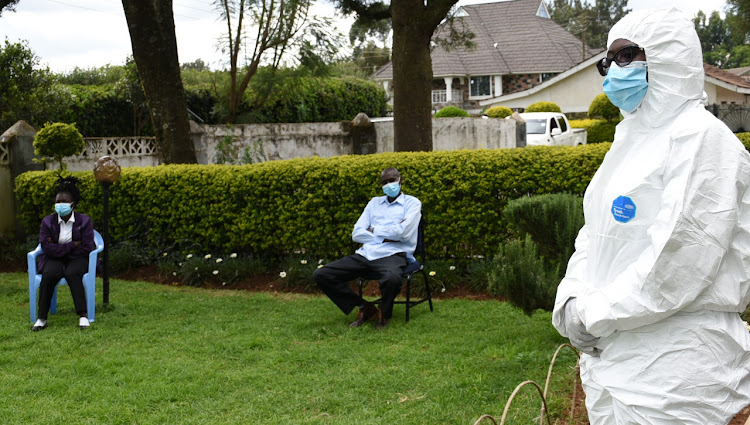 ISOLATION: Medics outside the Kamalel Isolation Center in Eldoret on May 30, 2020
Image: MATHEWS NDANYI

The Auditor General has called for investigation into contract and procurement irregularities involving Sh1.4 billion Covid-19 funds in Turkana and Uasin Gishu.

In a special county audit, Nancy Gathungu cited "serious irregularities" in spending of Covid funds in the two counties, among others.

Turkana, Uasin Gishu and Elgeyo Marakwet were allocated about Sh2 billion by the government and donors to fight the pandemic.

The audit said much of the money was spent haphazardly without proper planning, budget and procurement, which may have led to losses.

Turkana received Sh880 million. The auditor recommended a probe into all procurement contracts to identify possible criminality, waste and misuse of public resources.

It is headed by Governor Joseph Nanok.

The auditor cited "suspicious transactions and lack of guidelines" for retrospective contracts as the county was spending the money.

The county was cited for possible misuse of Covid-19 funds from the County Emergency Fund. It contained Sh187 million for Covid-19 activities but only Sh29.9 had been allocated as of July 31 last year.

The difference, the report said, implies that Sh62.3 million had been used on non-Covid-19-related activities, contrary to Public Finance management regulations.

On October 8, 2020, the balance in the account was Sh4.9 million yet a total expenditure o fSh31.8 million had been incurred for Covid-19- related activities by that date.

“Therefore, Sh150 was utilised for non-Covid-19-related expenditures as at October 8, 2020," the special audit reads.

It lists several companies that it said were irregularly awarded supply tenders for Covid-19 items without due procedures being followed and without proper documentation.

Some tenders were also awarded to ineligible bidders, it said.

Uasin Gishu received Sh570 million but the county contracted more from suppliers that were listed without negotiations, which is contrary to the Public Procurement and Disposal Act, it said.

The county is headed by Governor Jackson Mandago.

“It's recommended further investigations be carried out in regard to Covid-19 to establish instances of non-compliance with the relevant laws and regulations guiding effective and efficient procurement processes," the audit report read.

The county adopted the direct procurement method, not competitive bidding, presumably on grounds of the emergency situation.