• Maina Kamanda disclosed that the vote-rich Mt Kenya region had not officially picked any other spokesperson.

• The MP said those who think that Kenyatta will retire to oblivion were mistaken because he will have a major say in what the populous region decides. 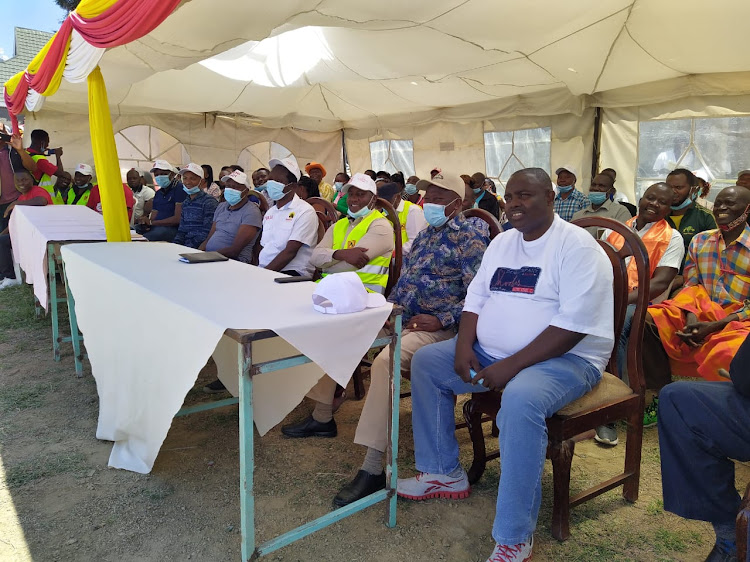 KENYATTA POST-2022 Several MPs at a strategic meeting ahead of the London word by-election in Nakuru Town West, The meeting was held at the home of area MP, Samuel Arama
Image: LOISE MACHARIA

President Uhuru Kenyatta will remain the Mt. Kenya spokesperson even after his term of office ends, Nominated MP, Maina Kamanda has said.

The MP said those who think that Kenyatta will retire to oblivion were mistaken because he will have a major say in what the populous region decides.

Kamanda disclosed that the vote-rich Mt Kenya region had not officially picked any other spokesperson and dismissed those promising to deliver the region to a particular candidate as busybodies.

Speaking during the Jubilee Party strategic meeting in Nakuru, Kamanda said the six MPs from the region purporting to speak for the Kikuyu nation had nothing tangible to offer.

He made the remarks at the home of Nakuru Town West MP's home Samuel Arama.

A clique of eight MPs from the region allied to the TangaTanga wing of the ruling Jubilee Party has been claiming that they will deliver votes for Deputy President William Ruto.

With the support of Nakuru Senator, Susan Kihika and her Bahati MP, Kimani Ngunjiri, the MPs have claimed that they will marshal the larger Mt Kenya region which has been expanded to include Nakuru and Laikipia counties to Ruto.

Leaders from Nakuru and Laikipia have been involved in the Mt Kenya political decision making including the latest one at Sagana Lodge organised by President Kenyatta.

Kamanda dared Senator Kihika and MP Ngunjiri to resign from Jubilee if they had confidence in the newly formed United Democratic Alliance.

“You cannot have been sponsored to parliament through Jubilee Party and you are using your position to campaign for a UDA candidate here in London because that is like using your neighbour’s hay to milk your cows,” Kamanda said.

Tuju asked the residents to consider the development projects in the area done by the government and ignore new outfits coming to woo them with cheap goodies.

Arama asked his Bahati counterpart, MP Ngunjiri to stick to his area and stop meddling with Nakuru Town West affairs.