• The destruction of sugarcane farms and two houses led to tension among the clans of the Maasai community at Ildolisho area.

• The area is at the border of Nkararo-Enooretet where Siria and Uasingishu communities have disputes over the common boundary.

The government has ordered the Siria and Uasingishu clans of the Maasai community to handover perpetrators behind the torching of two houses. https://bit.ly/3pvPL7g

The government has ordered the Siria and Uasingishu clans of the Maasai community to handover perpetrators behind the torching of two houses.

The order comes following the destruction of 40 acres of sugarcane plantations in Transmara West Sub County.

The destruction of the sugarcane farms belonging to prominent farmer Davis Dikirr and businesswoman Victoria Sompisha and two houses led to tension among the clans of the Maasai community at the Ildolisho area.

The area is at the border of Nkararo-Enooretet where Siria and Uasingishu communities have disputes over the common boundary.

Narok county commissioner Evans Achoki told the two communities to hand over the arsonists who are in their midst so that they can face the law.

He made the remarks after a security meeting at the Ildolisho area on Thursday.

“These criminals should be stopped by all means because we don’t want few individuals to destroy people's properties and use the issue as a way of comprising peace," Achoki said.

The county commissioner also noted that they will work closely with the elders of the two communities to ensure peace prevails in the region.

He told the locals not to worry about their safety as they have beefed up security and increased patrols in the area following the incident.

“These acts are purely criminal elements and those behind should be arrested and charged before the court for causing destruction," he said.

He added, "The management of the company should not consider it as bad cane because the two individuals have struggled in the growing of the crop production".

A local women leader Carolyne Nangea said the two communities have been living in peace for a long time and they will not allow few individuals to divide them along tribal lines. 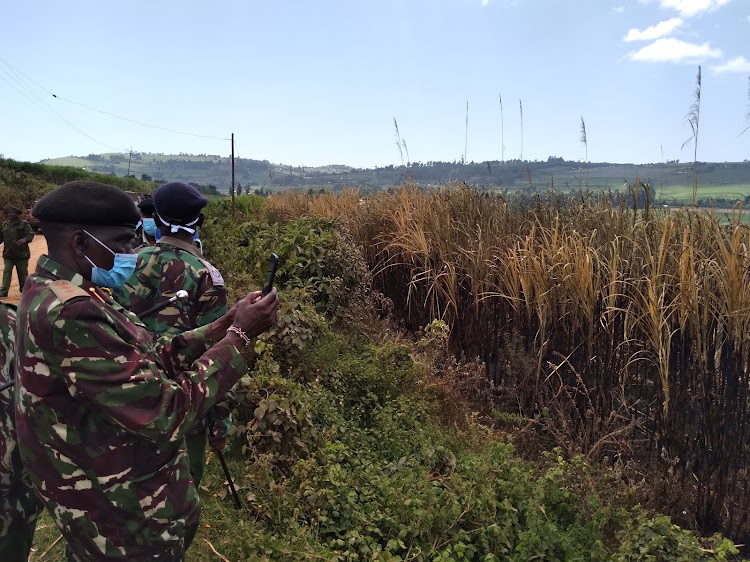 “The move by these criminals is to ensure that there is animosity among these two clans and the locals should be careful not fall into traps of these criminals who are not happy when peace triumph,” she said.

The security agencies in the sub-county led by Noor have been having peace meetings with the two clans that yield fruits and agreed to end the hostility.

In May 2020, two warring Maasai clans surrendered 14 illegal guns, 77 rounds of ammunition to the government as part of measures to maintain peace.

They presented the guns on different occasions to the deputy county commissioner.

Since the security apparatus launched a peace mission, over 100 firearms were surrendered over the last two years in the Esoit border within the sub-county where there were perennial tribal clashes and other forms of violence.

The curfew started at 4 pm and ended at 7 am.

Four months later, Natembeya revised the 4 pm to 7 am curfew hours imposed to 6 pm to 6 am saying he was comfortable by the way the residents were conducting themselves.